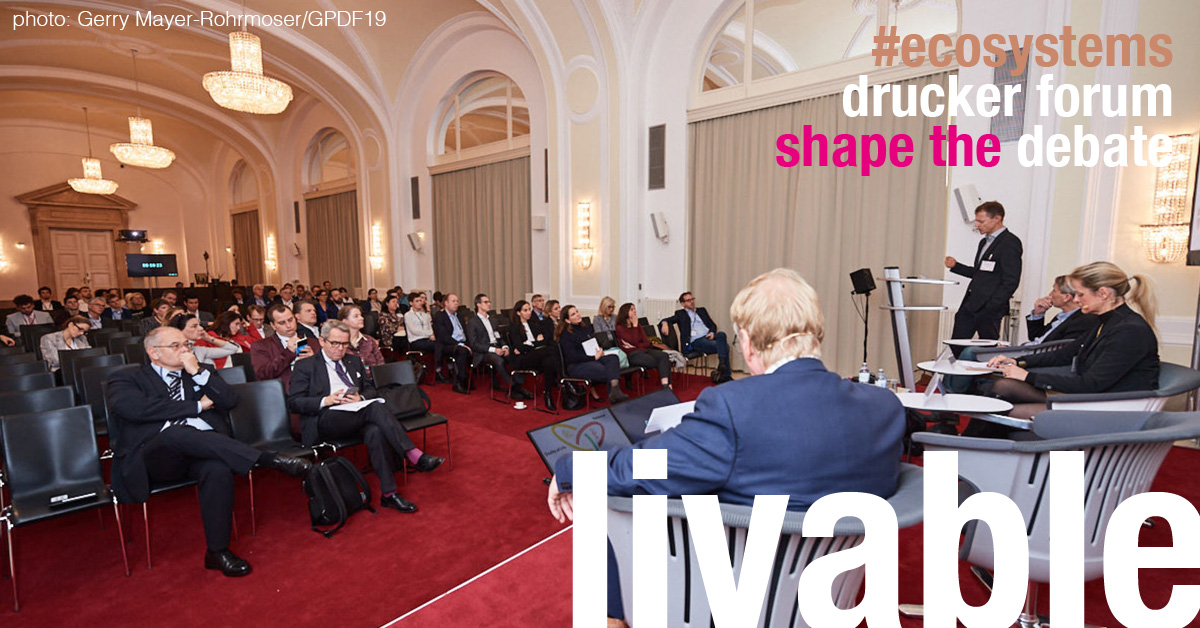 The cities of the future we imagined in the 1970ies were about flying cars and beautiful skyscrapers.

Where are we now? At micromobility with e-scooters? Where did it all begin? If the Renaissance began in Florence, Smart City began in Silicon Valley. While we know San Francisco as an ideal place to test the latest Smart City tech gadgets their City Government took an interesting decision recently: you now have to demonstrate which public value your technology will bring to the city.

What value does your tech bring to the city

Cecile Maisonneuve, President of the think tank Fabrique de la Cité, kicked off the Session on “Cities as Social Ecologies” at the 11th Global Peter Drucker Forum with this revealing development of urban policy. She goes on to explain: Cities are wonderful laboratories, but citizens are not guinea pigs. It seems we are currently living at a turning point in the way we are considering the future of cities. We seem to be coming back to the right questions. What is the purpose? What is the vision? Future cities have to overcome three main and intertwined problems, she argues:

1. Climate Change:
As worldwide two thirds of people are living in cities, urban policies will play a major role in this challenge. The discussion with the audience was quite controversial. Too drastic measures will lead to failure due to public resistance. Policies need to be ambitious and balanced at the same time, which is not a trivial task to pursue. Thomas Madreiter adds to the discussion that providing alternatives that work well contribute best to wider adoption of those alternatives.

2. Affordable housing:
Social and economic accessibility remains crucial to successful urban and economic development. The City of Vienna manages to tackle the issue of affordable housing in a way that no other metropoly has been able to. The social crisis upcoming around the world – illustrated by France‘s yellow jacket movement – is about the fact that cities increasingly exclude people who built them, says Cecile Maisonneuve.

3. Mobility
Mobility in a city is not about technology, e-scooters or public transport. Mobility is about people, about how you fulfill your program of activities every day: working, movies, shopping, taking the kids to school …

Cecile Maisonneuve proposes a new urban social contract. The classical social contract in cities was about taxation: paying taxes bought you services and representatives. The future model can be that we give data. What do we get in return? Mobility, social security, affordable housing, innovation …?

Cities as a contributor to climate change

Thomas Madreiter, Vienna‘s Director of Planning, sees the contribution of cities as critical in the context of climate change. Vienna initiated climate budgeting in June 2019 to address this as one of many initiatives. Another policy cornerstone in Vienna is affordable housing: Vienna started 100 years ago with its social housing program to tackle social inclusion and social peace. The so-called Red Vienna housing program is still one of the decisive factors that secure Vienna’s position as one of the world’s most livable cities.

Urban planning’s daily business is to deal with conflicting goals. Understanding the city as a social ecosystem in a modern way means urban policy must find compromises. In other words, the city has conflicting interests and that can’t be avoided. Thomas Madreiter concludes that embracing conflict and finding solutions in a collaborative process is part of the solution. No single technical solution can solve this problem. Solutions will need to involve people and city policies will be about conversations and finding solutions to mediate interests.

Martin Ferguson, Director of Policy & Research at SOCITM, contributed examples from the UK, citing Charles Booth, a social ecologist, who mapped poverty in London which resulted in a breakthrough in terms of public policy. Breakthroughs in this sense eliminated the blind spot that poverty existed in London. This enabled reformers to influence government to introduce a variety of social reforms that enabled the city to progress. Today the UK looks back on an extraordinary period of austerity in terms of public expenditure. The idea of centralist top-down hierarchical silo-based thinking has stifled innovation in the communities and brought about an inability to do anything to improve the human condition. This is why cities would need to focus on a local level and would need to leave the debate on a national level aside.

Deficits, according to Martin Ferguson, are less about budgets and more about visible shortcomings in other fields like poor air quality, unemployment, homelessness and other social problems typically migrating from the countryside to the cities. Manchester City Council and other municipalities like Barking & Dagenham demonstrated a new way forward based on a collaborative approach solving citizens‘ needs. Barking & Dagenham developed a data driven Social Progress Index to look at the causation of problems surrounding poverty and well-being in particular.

The crucial success of urban public policy seems to be whether the real problems that people are facing are being solved and communities are being included in the process. The development of city policy should focus on how to bring humanity back into managing cities. A shift from the Taylorist centrist view to a point that Charles Handy made as a conclusion of this conference two years ago: shifting to a more organic, social, evolving approach to improve the human condition, orchestrating the interactions – and going beyond harvesting just the low hanging fruit.

This article is one in the Drucker Forum “shape the debate” series relating to the 12th Global Peter Drucker Forum, under the theme “Leadership Everywhere” taking place on October 29 & 30, 2020 in Vienna, Austria.
#Druckerforum