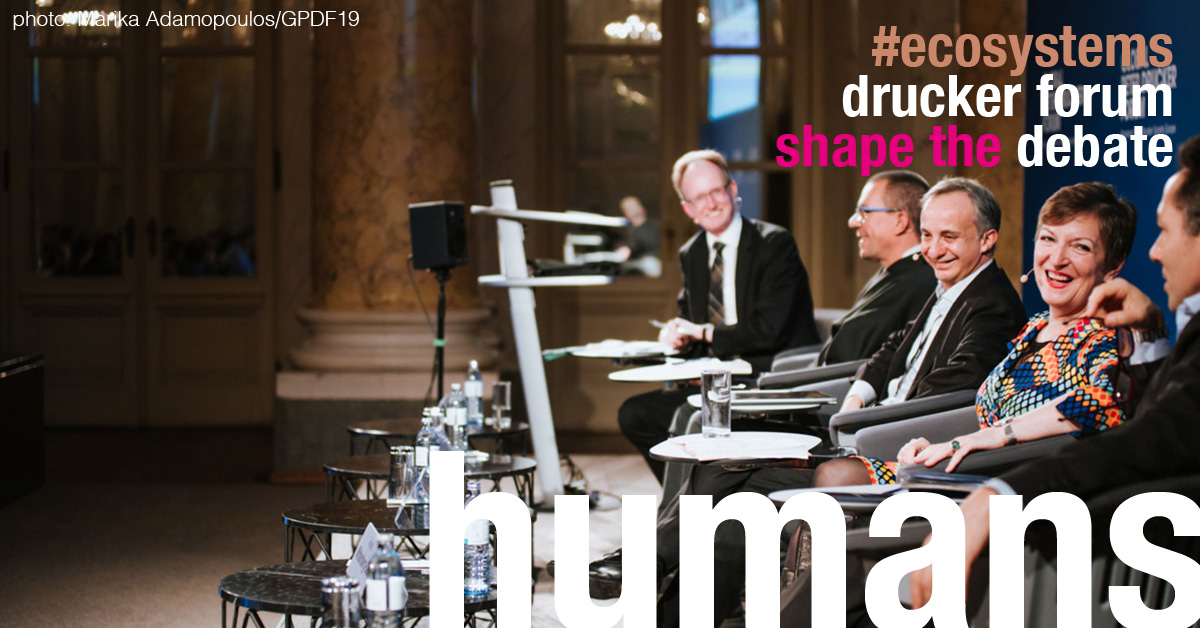 The corporation may be one ecosystem operating within a broader ecosystem. But at its heart remain the people who have to carry out the work that has to be done. This session of the Forum took time to consider the role of people and how they contribute to the wider ecosystem of business.

In the chair was Andrew Hill of the Financial Times, and he was joined by Michele Zanini, managing director of Gary Hamel’s Management Lab; Gianpiero Petriglieri, associate professor of organisational behaviour at Insead; Avivah Wittenberg-Cox, author and CEO of the 20-first consultancy; and Bart Weetjens, a social entrepreneur and a Zen priest.

Hill opened by recalling the words of the English writer and art historian John Ruskin, who identified three requirements for people to be happy in their work: they should be fit to do it, there should not be too much of it, and that people should have a sense of success in it. This neatly introduced the contributions from the panel, all of which, in their different ways, considered how humans react with the systems they find themselves in.

Incremental change is no longer enough

Zanini asserted confidently that the bureaucratic model of the organisation is no longer fit for purpose – too slow and inadequate to the needs of today. A lasting shift in management models requires radical change.

To get beyond slow, incremental change (which can be sabotaged) change has to be ‘syndicated’ – spread through the organisation. At the Management Lab this is called a ‘management hackathon’.

At one large consumer goods organisation which worked with the M-Lab, 4,000 employees were asked to reimagine the organisation’s management model, working on a dedicated collaborative platform. People felt they could change the system. The advantage of this approach is that, while 50 people working remotely on a change project can be blocked, thousands working in real time online (and visibly) are harder to stop. This is about ‘leveraging the wisdom of the crowd,’ he said.

What was happening to our experience of work? Petriglieri asked. Change today is freeing us up, potentially, but also freaking us out, he said. Existential questions arise in this context: will we survive, will we matter, will we be in charge?

We have poor management tools, in our theory and practice, to deal with these questions, he noted. We are better at instrumental questions (‘are we productive?’) than existential ones. Yet this is an existential moment.

Three hundred years ago what it meant to be human was to belong. The logic was tribal. Later we defined ourselves in terms of what we did, what we contributed. And there were two basic psychological needs which underpin this: the need to belong and the need to be free. We need to have some agency. Belonging and agency are the two pillars of humanity. When we dehumanise others, we either tell them that they don’t belong or we restrict their choices.

In this digital age people are asking, about this emerging world of work: will we be able to make friends? How free will my choices really be? Who are we becoming and with whom?

We need a different metaphor for work and leadership, Petriglieri suggested. We’ve had the military metaphor (the general), the saint, the entrepreneur…now we need to consider the metaphor of the artist.

Artists are free and cultural, personal but working for others, marketable but adding beauty…we need to stop the tyranny of thinking that says if we are preoccupied with becoming and meaning it means we are not practical, Petrigieri said. He concluded: There is nothing as human as a good story. We don’t need another theory of management. We need a different story of management if we are to figure out what it means to be human in ecosystems.

For Wittenberg-Cox, women were the ‘canary in the coal mine’, choosing to have fewer children. But this leads to the problems of the ageing society. Designed and organised for men by men, companies have yet to adapt to the arrival of women in the workplace – women have been allowed in but only as long as they become men (or at least display a close resemblance to the dominant group).

Women will change the organisation, but only if they are allowed in as women, Wittenberg-Cox argued. Companies need to become gender bilingual, not gender blind. They are not the meritocracies they think they are. Where women are excluded, the ecosystem is ‘set up to fail’. ‘The Drucker Forum is, at least, one of the most gender balanced conferences I have seen,’ she added.

Weetjens showed a film of his organisation, Apopo, at work. Apopo trains rats to locate land mines, which can then be safely destroyed. (This represents quite a change for him – formerly he had worked as a product designer, before becoming a Zen monk.) ‘We work on human potential and rodent potential!’, he commented.

What do our structures do and for whom?

In the discussion that followed the initial presentations panelists looked more closely into what a healthy and changing ecosystem at work might look like.

Petriglieri observed that ‘you can have too much control but also too much freedom’. Organisations should be neither stifling nor neglectful. Today’s level of control now is ‘FW Taylor plus an algorithm’, he said.

A question to ask is: what do our structures do and for whom? And: ‘does our work allow us to make work that resembles us, and make friends who do not? If not we are being dehumanised,’ he said.

Wittenberg-Cox noted: ‘Feminism is a movement against domination.’ And Zanini observed that, in his opinion, the best organisations feel like a community or a family, in which you can set your own path. Families are not always unproblematic, however. And parenting is a risky metaphor, according to the former psychotherapist Petriglieri.

This was a stimulating and wide-ranging panel which in just one hour raised all sorts of questions worthy of further enquiry. It certainly added depth and variety to the rich ecosystem that is the Drucker Forum.

This article is one in the Drucker Forum “shape the debate” series relating to the 12th Global Peter Drucker Forum, under the theme “Leadership Everywhere” taking place on October 29 & 30, 2020 in Vienna, Austria.
#Druckerforum