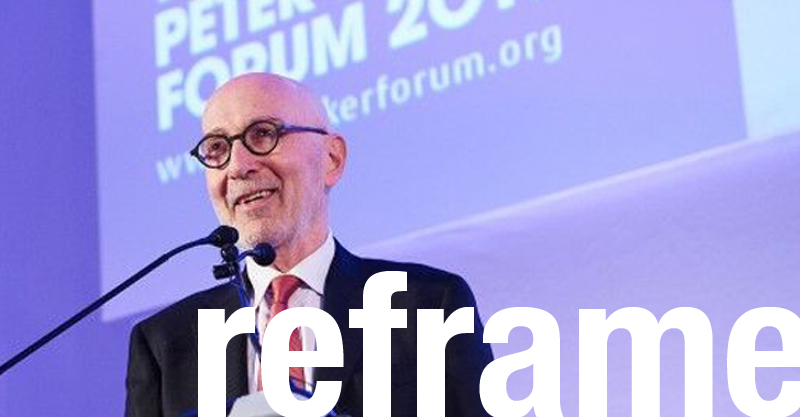 Peter Drucker was fully aware of the importance of disciplined planning and execution – hence his famous quote: “Plans are just good intentions unless they immediately degenerate into hard work”. He saw the need to tightly integrate the ideas and the plans for execution in the strategy process itself.

<<< This article was part of the ANR Newsletter series>>

Several years ago I had the pleasure of meeting Richard Straub over a long breakfast in Brussels. Richard is the founder of the non-profit Peter Drucker Society Europe after a 32-year career at IBM. he is keeping Drucker’s legacy alive through the Global Peter Drucker Forum, which has its tenth year anniversary in November this year.

Peter Drucker (1909-2005), considered the “father of modern management”, is one of my thought leaders because of his natural ability to translate complex matters into simple concepts.

I asked Richard if he could share a bit more about Peter Drucker’s view on Project Management:

“Peter Drucker was fully aware of the importance of disciplined planning and execution – hence his famous quote: “Plans are just good intentions unless they immediately degenerate into hard work”. He saw the need to tightly integrate the ideas and the plans for execution in the strategy process itself.”

Drucker authored more than three dozen books. He argued strongly in decision-making, that the assembly line was in fact very inefficient because it only allowed things to be done in sequence. He also introduced the idea the knowledge worker, and of management by objectives, aiming for long-term goals by setting a series of short-term ones.

In the interview with Richard, we discussed the challenges Governments around the world are facing with Policy Implementation, and the theme of this years’ Drucker Forum, around the Human Dimension in the face of the new technologies. I also wanted to find out more about the longevity secrete behind IBM.

Strategy, policy design project management must be tightly intertwined to be successful and improve our world. Because of the lack of this unintended consequences of policy implementation abound.

Richard, thank you so much for accepting to share your invaluable experience and perspectives with our community of experts that want to make a better world.

Q: In your time at IBM it has gone through major transformations – how did you experience this?

In my years at IBM, from 1973 to 2005, I did indeed work for three different companies – it was by no means one identical organization. First, what I would call the mainframe IBM with a distinct culture inspired by the Watsons, then the PC IBM (I was much involved in the launch of the PC in Europe and then engaged as a member of the global team), and finally the services organization under Lou Gerstner’s lead.

For the most amazing and rewarding experience was the way IBM established within a rather hierarchical and command and-control-oriented organization a new independent PC-unit and gave it significant freedom and empowerment – at least for the first years. This created enormous motivation, engagement entrepreneurial spirit.

Q: IBM is a corporation that embraced project management as a core skill since the 1980’s. Has this focus and skills beneficial for IBM employees, executives, overall success? In what sense?

Project management was of utmost importance in IBM’s transformation in the 90s and has kept a central role ever since. The torch was originally carried by former IBM CEO Lou Gerstner who decided to transform IBM a project-based enterprise by raising project management to a strategic competency for the corporation. By implementing an executive governance structure, he embedded this commitment in the IBM management system far beyond his own tenure. It all culminated into an IBM Center of Excellence for PM overseeing the certification of thousands of certified PMs – a strong and vibrant community within the company.

Q: We, project managers, claim that we turn dreams into reality. One of your dreams was to create the Peter Drucker Forum and keep his legacy alive. How did you make it happen? Was the project executed according to your initial plan or you had some struggling moments?

To be totally honest – I stumbled into it. My wife Ilse and I certainly had a vision of what we wanted to achieve – Peter Drucker on the occasion of his centenary in the city of his birth and upbringing. It was only then that we found out that it shouldn’t be a one-off activity and that the enthusiastic response we received at the first Forum in 2009 was a mandate to continue.

As Henry Mintzberg (who BTW is a great supporter and friend of the Forum) might say, our strategy and implementation were “emergent” – we learned as we went along and made decisions on the fly. We had elements of the project plan formalized year by year but kept it to be able to adapt rapidly. As a small non-profit structure, we did struggle a lot – but we were fortunate that the overall project got great momentum and recognition which helped us to overcome the headwinds.

Q: Was the great Peter Drucker aware of the importance of project management? If so, what did he say about it?

Peter Drucker was fully aware of the importance of disciplined planning and execution – hence his famous quote: “Plans are just good intentions unless they immediately degenerate into hard work“. He saw the need to tightly integrate the ideas and the plans for execution in the strategy process itself. He also constantly reminded us that it is not good enough to execute well and to focus only on the implementation part of projects – as in “There is nothing so useless as doing things efficiently that shouldn’t be done at all“.

The principles that he outlines in his magnum opus “Management: Tasks, Responsibilities, Practices” are still valid today e.g. when he speaks about feedback information for self-control, continuous learning and the linkage between planning and doing. According to Drucker, even creativity needs to be founded on a strong professional and well-structured work environment, not on chaos and “anything goes”.

Q: One of the most pressing needs when talking to Governments and Institutions is the importance, and challenges, of Policy Implementation. Is it about creating sustainable impact in society and citizens? How can we convince them that they need to focus on project delivery to improve society and create a better and more equal world?

I would argue that as with strategy, policy design and implementation must be tightly intertwined. Because of the lack of this unintended consequences of policy implementation abound.

Examples are the regulatory response to the financial crisis that led to a mindless bureaucratic approach stripping from banks their core responsibility to fund the real economy based on sound business assessment and risk management. Nobody would argue that leaders of financial institutions shouldn’t be held accountable for their actions and for any damage on society, but if the only way we can respond to this is an all-pervasive and extreme compliance and bureaucracy driven micro-management model, it shows how little regulatory bodies know about leadership, management, governance accountability.

Another example is the rigid bureaucratic framework for innovation projects the European Commission has set for the projects they fund. It’s all justified by regulations and by transparency – but it has nothing to do with the reality on the ground that needs flexibility and the ability to pivot when continuously learning during the project cycle.

Q: This year is the tenth anniversary of the Global Peter Drucker Forum – what is the theme of the event? How does it connect to projects and project management? What will they learn if they join the event in November 2018?

The Drucker Forum 2018 places the human dimension of management at its center. I believe this is appropriate as it was the center of gravity for Drucker’s thinking.

What does this mean? We’ll look primarily through the “human lens” at the challenges of our time.

The Drucker Forum aspires to contribute to this “human re-framing” which implies two major components – on the one hand rediscovering what it means to be human in the face of new technologies such as AI, and on the other reconnecting to the reality of the world we are engaged in. A scientific and engineering approach to management brings important insights to its systematic and organized elements – but we must find a new balance with the human side – which is where Drucker and his ideas about management as a liberal art will enrich the discussion.

Management is much more than a science and a purely rational construct. It is about relations between people, about aspirations, emotions, ambition, politics, empathy, while at the same time providing a framework of how to harness these forces of nature to the benefit of companies and societies. Project management as key management discipline will benefit from this discussion as it will provide input to a transition that it has itself already begun, i.e. to achieve a new balance between formal and highly disciplined approaches and the human realities that require flexibility, nimbleness agility.

If you want to find out more about Richard’s latest thinking, here is the first HBR article of the Drucker Forum series: Socially Responsible Business Can Only Succeed If It Becomes a Movement

Antonio Nieto-Rodriguez (www.antonionietorodriguez.com) is the world’s leading champion of Project Management and Strategy Implementation. He is the creator of concepts such as the Hierarchy of Purpose, featured by Harvard Business Review, or the Project Revolution; which argue that projects are the lingua franca of the business and personal worlds from the C-suite to managing your career or relationships.

Antonio’s research and global impact in modern management been recognized by Thinkers50 with the prestigious award “Ideas into Practice”.

He is the author of the best-selling book The Focused Organization*; has taught at leading business schools, including Duke CE, IE Business School, Solvay, Vlerick Skolkovo; has been featured in several magazines, including The Economist, Singapore Management Institute, and Strategy Business Review. Antonio is a much in demand speaker at events worldwide. Over the past 15 years, he has presented at more than 160 conferences around the world, regularly evaluated as the best speaker.

Born in Madrid, Spain, and educated in Germany, Mexico, Italy and the United States, Antonio has an MBA from London Business School and is fluent in six languages.

This article is one in a series related to the 10th Global Peter Drucker Forum, with the theme management. the human dimension, taking place on November 29 & 30, 2018 in Vienna, Austria #GPDF18.