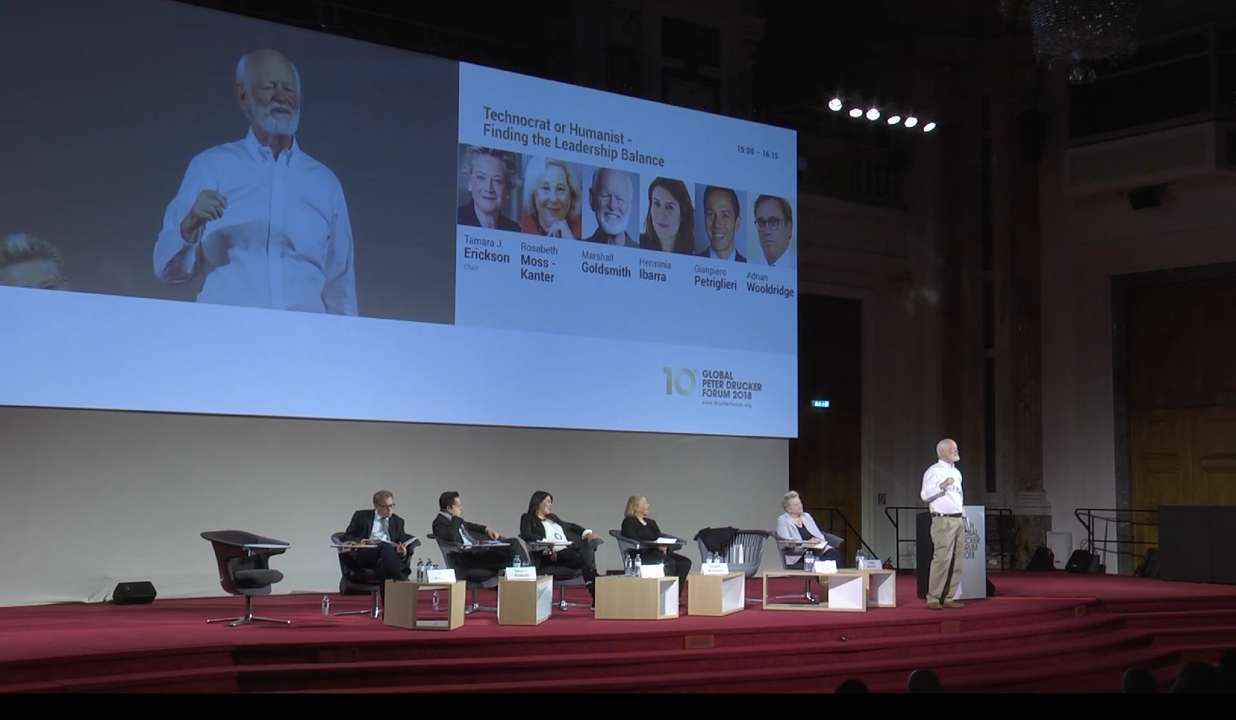 One of my favorite presentations at this past November’s Global Peter Drucker Forum was from Marshall Goldsmith, a leadership coach and the author of, among other books, “What Got You Here Won’t Get You There.” As the title suggests, the qualities that make leaders successful as individuals can later become obstacles to their success as leaders.

Ascending to a leadership position requires prioritizing your individual success. Along your journey to a leadership role, you’ll likely face tests – both literal and figurative – that require you to prove how smart and capable you are as an individual. But great leaders need to work in the best interest of the people they manage, and not themselves.

Here are a few examples of the obstacles that stop leaders from being the best they can be.

Leaders are winners. In fact, they love winning – no matter the context, and, sometimes, to their own detriment.

Marshall provided a funny example that he shares with his own clients: imagine making dinner plans. You want to go to Restaurant X, but your partner likes Restaurant Y. You decide to go to their choice, and you hate it. The food is bad, the service is bad, it’s a major disappointment. How do you react?

You could say “I told you so.” Critique the meal, complain about the service, and insist that dinner would have been way better at Restaurant X.

Or, you could just keep quiet. Eat the food, try to enjoy it, and make the best out of the evening.

Which option do you think is better? And which do you think many people actually do? The obvious answer is to just keep quiet and try to have a good time, but leaders are competitive. Your instinct may be to prove that you’re right, but what would you even gain from having that argument? You’d end up with a bad night and a pretty annoyed partner.

Winners want to win at all costs, even if the “battle” is over something trivial. It’s an instinct that leaders should resist not just in their personal lives, but at work, too. If you’re in a position of authority, you don’t need to prove yourself. And in fact, if you keep trying to sound like the smartest person in the room, you’re more likely to alienate the people who depend on you, rather than provide any sort of valuable support.

The desire to add value

We all want to be seen as a valuable member of our teams. That instinct doesn’t really go away as a leader, but it can become more of a problem the higher you climb up the ladder, and that’s because of the influence your contributions can have on others around you.

Marshall provided another example: imagine a member of your team tells you their great idea. You like it, and you tell them so. But, you also throw in a suggestion. “Nice idea, but why don’t you add this, too.” There, you’ve added value. Job well done, right?

Not quite. Because, as Marshall explained, a suggestion from one’s boss is not merely a suggestion – it’s an order. Whether you intend to or not, the minute you make a suggestion to a member of your team, you’ve given them an order that they feel obligated to follow. So, when you decide to add on to their idea, you’ve actually made it your own. You may have added 5 percent of value to the idea, but you’ve removed 50 percent of their motivation to execute the idea, because it’s now something their boss has ordered them to do.

Instead of trying to add value, bless their idea as is, effectively taking yourself out of the way so they can get it done.

The workforce of the future will be primarily knowledge workers. These people are the experts in their fields and will know more about what they’re doing than their leaders. But, leaders are traditionally taught to give orders – to tell their teams what to do and how to do it.

That simply won’t work in the era of the knowledge worker. How could you possibly dictate orders to someone who knows more about their own job than you do? It makes much more sense, Marshall said, for leaders to ask their teams how they think something should be done, and then empower the team to get it done themselves. Leaders need to ask, listen and learn.

This all sounds simple and intuitive, but it’s hard to do in practice. Marshall had a piece of advice: the next time you’re presented with a “test” of your leadership, just try to stop and breathe. Acknowledge any instincts to prove your smarts, add value, or give an order.

After that, I would suggest you think about what you could say or do that would actually help your team. In some cases, it might be to clear an obstacle for them, or to provide some resources that can help. Other times, it may be better to do nothing at all. If already you’ve done a good job hiring and empowering your team, then it could be best just to pass along some encouragement and let them get to work.

We see this type of thinking align well with the whole idea around servant leadership, a phrase that popped up in the last decade around the whole agile thing but something that has been out there for sometime as a mindset around being a better leader. We recently talked about The Servant Leader in our podcast series on The Emerging World of Work.

Alex Adamopoulis is the Chief Executive Officer at Emergn Limited

This article is one in a series related to the 10th Global Peter Drucker Forum, with the theme management. the human dimension, that took place on November 29 & 30, 2018 in Vienna, Austria #GPDF18 – you can also check out my other articles related to the Forum; 5 Lessons the Managers of Tomorrow – and – The Power of Pull vs Push in Innovation

This article was first published on LinkedIn Pulse