HM:  I have been writing in these TWOGs about the role of the plural sector in rebalancing society: first to recognize that it must take its place alongside the sectors called public and private (hence calling it “plural”, rather than civil society), and second to realize that the restoration of such balance will depend especially on this sector. The private sector is too powerful these days and the public sector overwhelmed by that power.

Some people don’t get the idea of the plural sector, perhaps because it has been so marginalized by the great debates over left versus right—private sector markets versus public sector governments. Where to put the plural sector, comprising all these community-based and other associations that are neither public nor private? NGOs, clubs, churches, unions, mass movements, social initiatives, and so on? Wolfgang Műller, Chief of Operations of the City of Vienna, who had read my book about Rebalancing Society, got the idea—in principle. Then he experienced it in action.

I met Wolfgang last Wednesday when he organized a workshop I did with his colleagues at the City of Vienna, before I attended the Global Drucker Forum in that city. He recounted a story about how this understanding in principle suddenly became an understanding in practice. I asked him to write his story down.

WM:  On Friday September 4, I was sitting in my office in Vienna City Hall when I learned on twitter that refugees from Syria and Afghanistan, some with children, had decided to walk the several hundred kilometers from Budapest to the border of Austria, determined to get to Germany, their land of hope.

Suddenly, within hours, Vienna’s train stations became organized as hubs for thousands of refugees—buses in, trains out. In such a situation medical care, food, and overnight shelter had to be organized, usually in association with NGOs such as the Red Cross.

While my staff was coordinating the crisis management network, I needed to get a hands-on impression of what was happening. I went to the new central station, where I saw all kinds of people helping with translation, providing medical aid, and distributing blankets, clothing, and food. Among them was a group wearing shirts emblazoned with “Sikh Help Austria”; they were dishing out warm meals from big pots that they had brought. 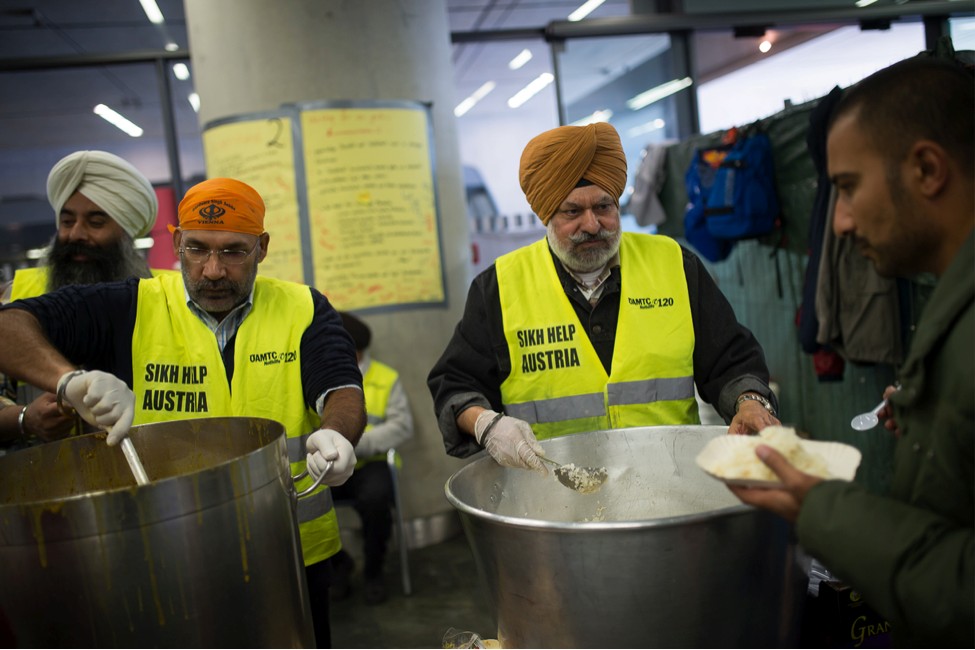 Something truly amazing had happened. Citizens young and old, some the children of immigrants or themselves earlier immigrants, decided to take action. They asked themselves what in Henry’s book is called “the Irene question”—“What can I do?”—and here they found an answer. Using social media, they organized themselves into a sort of citizens’ start up, dedicated to helping the refugees. They called it The Train of Hope (@trainofhope).

Here are some statistics: 180,000 meals were served in September alone, by 350 volunteers every day, including about 5,000 warm meals by Sikh Help Austria. (These statistics are from what could be called the management accounting “department” of that Train of Hope! Even that sprung up, as if from nowhere.)

Now, when The Train of Hope asks via social media for bread or bananas, the items usually appear within the hour: hundreds of kilos. Social media entries are updated regularly and the posts are now followed avidly by about 300,000 Austrians.

At first, we in the city administration were very surprised. But then we realized that this was not uncoordinated. It was a highly professional, high speed performance. That is when it dawned on us that here was the self-organizing plural sector in action. So we in the city administration decided to give The Train of Hope all the technical support it might need, including background support on call. We then invited The Train of Hope to join the city’s crisis management network, an offer that was accepted. I am delighted to report that this cooperation has continued to perform consistently well, with no end date yet clear.

This is a PPP of a different kind: a public-plural-partnership, agile and flexible—sharing the governing of a crisis. Why Not? Isn’t this smart government? Much has been written about the sharing economy. But this is not like sharing lodging, as in Airbnb. It is about sharing concern, and help, and hope.

I am passionate about my work for the city of Vienna, and I feel privileged to be part of these very special events. Thanks to The Train of Hope, and the contribution of plural sector as a whole, I am now even more positive and optimistic about our future. If you are near Vienna, just go and take a look.

HM: I went on to the conference the following two days. On Friday, Wolfgang sent me his email with the story. I read it late that evening. My alarm was to ring in time to get me to my plane the next morning, but I woke up earlier. What to do with the extra time? Of course: just go and take a look.

It was quiet in the station at 8 am. (Turns out that it is now cleared in the evenings so that every refugee has an overnight bed.) But I was able to walk through where several people were still there, some in family groups, many sleeping, while other young men were talking together, killing time. I asked one family if I could take a photo but a young man waved me off.

Outside, clothing and supplies were stacked up neatly in tents. I saw a rough sign that read “Refugees Welcome.”  Nearby was a plastic sheet meant to be a door. I went in: this turned out to be the volunteers’ area. A woman at a desk asked “Do you want to help?” “I’m sorry, I can’t”, I said, “I have a plane to catch.” But then I realized that I too had an answer to the Irene question: “We’re writing a blog about this.” About hope.

© Henry Mintzberg and Wolfgang Müller 2015. The opinions and views expressed in this article are those of the authors, and do not necessarily reflect those of the institutions to which they are affiliated.