The On-Demand Economy provides a preview of where society is going: now and more so in the future typically employed work will be sourced from platforms: graphics design, secretarial services, programming … 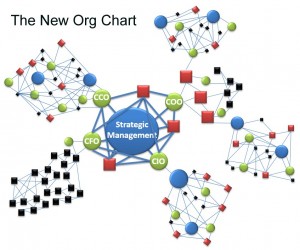 Logical consequence will be a strong increase of freelance work. In 2015, in the US more than 40 percent of the workforce were in insecure contingent jobs [1]. Employment is slowly going to erode and companies will shrink to a strategic core of managers who source most work from platforms.

In addition, such commoditized labour experiences a globalization of competition (unless it’s bound to a site like taxi driving). Crowdworkers (freelancers on platforms) will also not have a work contract, but sign standard terms of service instead. Pay is determined by auction, not by minimum wage and work may be allocated by an algorithm, i.e. the boss is a computer.

Hence we have work ‘above the algorithm’, creating the platforms, and work ‘below the algorithm’ receiving their tasks from platforms [2]. Work above the algorithm tends to program its ideology into the code. The ideology found in a number of on-demand platforms is wage dumping. In Turkers’ (casual for freelancers on Amazon Mechanical Turk) descriptive lingo: “Wage theft is a feature, not a bug“.

We have seen this before: As one era ends and another begins, change occurs at a pace and scale that disrupts all aspects of society. 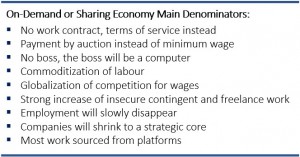 We are now leaving the industrial era and enter the network society. When, over centuries, ancient civilization morphed into the industrial era, traditional craftsmen were disrupted by early industrialists. Even government was disrupted: monarchies were replaced by republics and democracy. The early industrialists, the ‘Robber Barons’, could amass great wealth in that they owned machinery and factories, giving them the power to dictate work conditions and wages. Then unions formed and re-established balance.

Today, people, driven out of regular jobs or not making enough as freelancers compete for tasks that are paid a tiny fraction of any possible minimum wage – several hundred thousands of them on Amazon’s Mechanical Turk platform alone. Just like the last era change, but with one difference: the new ‘Digital Robber Barons’ own data and infrastructure as intermediaries, but not the physical assets needed to deliver the actual service sold. Uber as the largest taxi company in the world doesn’t own one taxi, Airbnb doesn’t own a single apartment and Facebook as the largest media concern doesn’t produce content. The physical assets required to do the job are paid for by the workers.

Business models and the way we work, even government, are ready for disruption again, and maybe this is a chance for millions of people to create work for themselves in a self-responsible manner. Following the thoughts of Angus Deaton this could even enable developing countries to better participate in growth. Mankind has come a long way negotiating and fighting for social standards evolving from the tribal and feudal system and early ‘Robber Barons’. As such, business models are up for disruption, but social achievements have to be safeguarded and even developed further to suit network society. In fact it’s less about humans against robots: the question is more about how humans treat humans.

It may not be too realistic to expect the economy to regulate itself in creating fair working conditions. There is no such evidence in history. Without some kind of unions and a suitable legal framework crowdworkers alone may not be able wrest sustainable conditions for themselves (no such earlier evidence either). The responsibility for a smooth transition of society, preventing upheaval and unrest due to poverty or mass unemployment lies with governments, along with setting the rules for a networked society – and co-creating a vision of how such a future should look like.

Governments could be disrupted by corporations that already operate like platforms and networks – later maybe starting to form corporate states similar to the seasteads (floating cities of likeminded people recognized as a sovereign state) as proposed by Peter Thiel of Paypal. Who knows? Government is under attack at its core: MIT’s John Clippinger is quoted saying “Who needs government?” Currently, governments are confronted with a very powerful private sector and face eroding trust by the population. How to regain this trust and re-enter the arena as a balancing factor vis-a-vis the private sector protecting citizens against eroding social standards? Short: How will government disrupt itself?

Across the historical divide the organisation charts of companies and governments of every era took the shape that society showed as a whole. Currently organisation charts are developing into a networked structure. Therefore, government, too, must interact with networks. This way contact with citizens can be re-established and mutual (!) trust may be regained. Change wouldn’t need to be imposed – it could be co-created. Such results may see better endorsement, too – something that current policies often lack.

Finally, when it comes to co-creating a vision and common understanding of how our future should look like, a book by Jonathan Lear comes to mind: In ‘Radical Hope’ [3] he tells the story of the Crow Indians who were confronted with the extinction of the buffalo – their almost sole source of work and food. They were faced with cultural devastation: The way they used to live for centuries would end. Realizing the desperation and depression of his people, Chief Plenty Coups realised that his nation had to develop a new vision of how they should live and eat in the future. He called this concept ‘Radical Hope’. The economist Lawrence Summers warned that the world currently lacked that kind of political leaders – similar to the ones who helped shape the public policy during the industrial era [4].

The Crow Nation survived. Today it is our generations’ common responsibility to build a future that is inspiring and worth while – not just for a few, but for society as a whole. A strong public sector needs to re-enter the playing field to help build shared prosperity in addition to shared economy.

Isabella Mader is Director of the Excellence Institute and university lecturer in the fields of Knowledge Management, Information Science and IT Strategy. 2013 she was awarded “Top CIO of the Year”. Her current research focuses on Network Economy, Communities and the Sharing Economy.