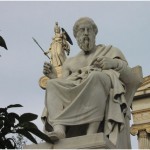 Over two and a half millennia ago, Greek philosophers gave us the “dialectical” method of constructive argument. In the 21st century democracy is faced with significant challenges, and moving forward may require searching for solutions from the wisdom of democracy’s inventors.

The dialectic method is a form of reasoning based on dialogue of arguments and counter-arguments, advocating propositions (theses) and counter-propositions (anti-theses). The dialectical method of dialogue is unique and different from rhetoric and debate in that it aims to converge the opposite points of view and form a new and superior point of view from the synthesis of the initial arguments. This transcendence is possible by searching for commonalities between the two opposing points of view when considered in the larger context or whole of which they are both part. Ancient history not applicable to the problems of today’s highly technologized and interconnected world, right? Not necessarily.

Fast forward to the 21st century: Roger Martin, #6 on the top fifty management thinkers of 2011 (http://www.thinkers50.com/biographies/95) and a guest speaker at the 2012 Global Drucker Forum is the creative force behind two of the most valued management models: Integrative Thinking and Design Thinking.

Roger Martin defines Integrative Thinking as: “the ability to constructively face the tensions of opposing models, and instead of choosing one at the expense of the other, generating a creative solution of the tensions in the form of a new model that contains elements of the individual models, but is superiors to each” (http://rogerlmartin.com/devotions/integrative-thinking/). Sound familiar? Roger Martin’s concept was actually developed by interviewing some of the world’s top business leaders and entrepreneurs. Apparently these “integrative thinkers” go about solving problems differently than “conventional thinkers”; and step 4 of the figure below has an uncanny resemblance to the dialectical method.

And so, without the benefit of modern technology or access to a study group, Socrates said pretty much the same thing more than 2500 years ago. And as we look to the challenges faced by democracy in the 21st century, we may have to take Socrates and his fellow Greek philosophers seriously.

But what is the main challenge of our century’s advanced democracies? A lot of the challenges can actually be related to one dominant culprit: complexity. Small start-ups are good sources for inspiration when it comes to agility, but past a critical mass agility gives way to complexity as a bureaucracy grows in size. And advanced democracies are experiencing the “complexity” by-product of progress to a growing degree (see the 2008 financial crisis and other systemic events). And so, in the current construct of democratic progress, agility and complexity seem to be mutually exclusive; so much so that the left and right political ideologies of the leading modern democracy, the USA, can be said to be increasingly aligned to the agility thesis and complexity antithesis. On one hand, the left ideology is advocating for a top-down, bureaucratic approach to tackling complexity. The right by contrast is advocating for an agile bottom-up, government-free approach to tackling complexity. In true agreement with the dialectical method, the future of democracy may well need a transcendence of those two viewpoints into a synthesis that would bring together bureaucracy and agility: an innovative, agile, next generational government together with a private sector responsible to all its stakeholders, not just its shareholders.

But the transcendence of the current left and right political ideologies which could be the answer to the complexity dilemma also has to happen at the level of the individual human being. And there are more subtle ideological differences between the left and right political parties at that “micro” level. There are so to speak, emotional and behavioral differences in how the individual is perceived. The left ideology emphasizes a compassionate view of the individual, and sharing opportunity with the less fortunate, those that are somehow left outside the system with all its benefits. At the same time, the right ideology emphasizes the competitive human side that is by definition individualistic and not necessarily in alignment with compassion. Are these ideologies, apparently opposed, actually facets of the same human construct when regarded from a more holistic perspective? Are human beings both compassionate and competitive? For a successful society that both makes progress and takes care of its less fortunate, are these attributes not required simultaneously? And if so, is there a model that could reconcile these so that democracy itself has a future? Is the distant future of democracy predicated upon the disappearance of the left and right ideologies?

Roger Martin’s second area of interest, Design Thinking, may provide the solution to an ideology-free democratic construct. Design Thinking, closely related to Integrative Thinking, can be described as a style of thinking that is generally associated with the ability to combine empathy for the context of a problem, creativity in the generation of insights and solutions, and rationality to analyze and fit solutions to the context. A Design Thinking approach to political ideology could bring the two dominant ideologies closer together, by demonstrating a shared concern for the individual’s well being, both in terms of the basic need for individualism (competitiveness) and inclusiveness (compassion). Creativity, the key ingredient of Design Thinking, represents that uniquely human trait which could lead the way to a future world where competitiveness and compassion are symbiotic and simultaneously harmonious: that is, there is no need to alternate between the two every four years.

Liviu Nedelescu is a management consultant and business thought leader with an astute globalization understanding framed by two opposable extremes: high complexity transformation in advanced economies and agile start-up entrepreneurship in emerging markets. Mr. Nedelescu is also a keen observer of the enduring human predicament defined by the perpetual tension between creativity and fear of change.