I was first introduced to Peter Drucker – and to the broader management discipline in general – through my entry to the inaugural Drucker Challenge in 2010 and subsequent participation at the Drucker Forum in Vienna that year. At the time I had been working on a poverty reduction programme in Bangladesh, and since my work has taken me to a variety of international contexts to engage with a variety of complex social problems. Each problem needs a different solution, and each solution requires a different approach. However, one managerial principle lies at the centre of any effective initiative in this field: participation.

In The Practice of Management, Drucker explained that, ‘A decision should always be made at the lowest possible level and as close to the scene of action as possible.’ In development and post-conflict programming, we need to enable those we are trying to help to be at the centre of all decisions, and to empower them to make the decisions themselves which will change their lives sustainably. In this holiday blog post, I am keen to introduce the Grassroots Reconciliation Group (GRG), a small NGO I currently work for in northern Uganda, which uses an innovative bottom-up management system to achieve its goal of reintegrating former child soldiers into community life.

While this year’s YouTube phenomenon, KONY2012, attracted a wealth of attention to the plight of child soldiers in northern Uganda, its critics have fairly pointed out that the issues it presented did not necessarily depict the nature of problems faced by formerly abducted people today. An estimated one in three boys and one in six girls in northern Uganda was abducted by the LRA during the twenty-year conflict. Between 33,000 and 50,000 children were used by the LRA as slaves, distributed as ‘wives’ among the rebel cadre, or forced to pillage and kill on the front line.

‘When I came back home, people said I had evil spirits. I felt as if I was being chased away.’

‘I felt like a stranger, like an outsider. I had no one to talk to and nobody seemed to trust me’.

The LRA left northern Uganda in 2006. The majority of these child soldiers and ex-combatants have also now returned to their villages. Indeed, most are no longer children. But the return home has presented a whole new set of challenges for these young adults; many are stigmatized because of the atrocities they committed, while others continue to be haunted by trauma from what they saw or did ‘in the bush’. With war and captivity preventing education or agricultural production, few have any employment today, or skills from which to gain an income.

‘When I first returned my mind was disturbed. This group has helped me to cope with everyday life; it has given me a purpose and a sense of belonging, something I hadn’t felt since I left LRA.’

The Grassroots Reconciliation Group was set up in 2007 to respond to this gaping need for community-based reintegration in northern Uganda. We have since worked with over 1,000 people, engaging groups which combine former child soldiers along with other community members to work together on reconciliation, peacebuilding, and livelihood-development activities. Evaluations have shown that 92% of beneficiaries report improved relationships after engaging in a GRG group. 67% have created new businesses as a result of GRG’s intervention, and 87% are now able to save money. This combination of improved relationships and livelihood opportunity has created hope and a new future. 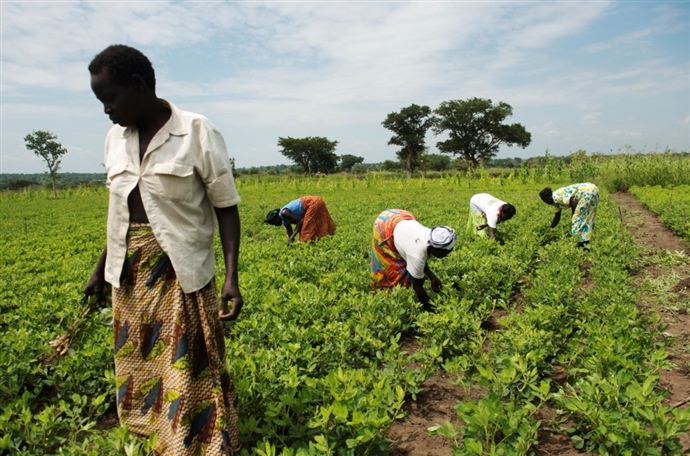 Above: Group members working together on collaborative farming.

What makes the findings all the more interesting – certainly to followers of this blog – is that the achievements result largely from an innovative management approach. While most NGO-projects in northern Uganda (and elsewhere) tend to be designed in air-conditioned HQ offices in London or New York (for example), GRG’s projects are all designed in villages, by the very people who GRG seeks to partner with and help. Each individual and each community is different. GRG itself works across a vast geographic area spreading from the main regional town of Gulu to the remote, dry Uganda-South Sudan border. Different groups face different challenges, and see different solutions to their problems. Not only must we respond to these diverse challenges, but we need those people we work with to feel that they are in control. Otherwise, impacts will be short-lived as beneficiaries will not feel in control of their own futures.

‘My relationship with the ex-combatants has improved because of farming together – when you go in the field and you laugh, you get to know how to talk to others and resolve disputes.’ 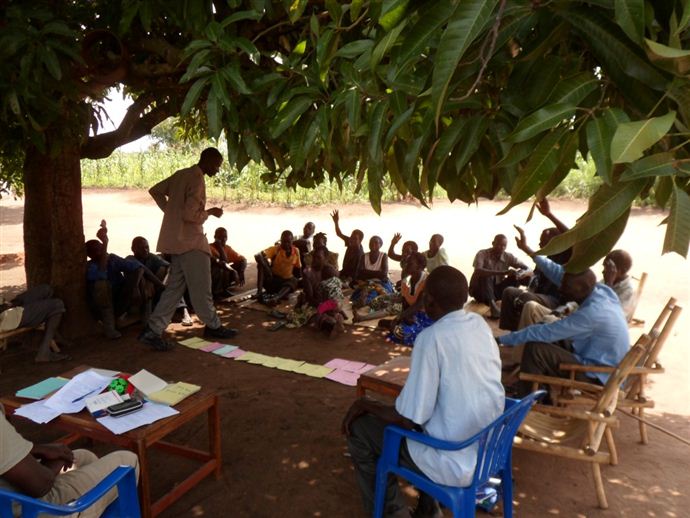 Above: Group members of ‘Kica Ber’ (meaning ‘Being Kinds is Good’) collaboratively identifying their priority problems.

While companies seek to respond to the changing needs of their customers, GRG’s bottom-up model puts the customers in control of what they are provided with. GRG supports groups to explore their problems, and to identify the possible solutions themselves. Groups design their own long-term plans for individual and group development (see more here), and implement these plans themselves with GRG’s support. The most common area of our work is group livelihood support – where training and agricultural inputs increase skills and income among members, while also enabling groups to experience collaboration, problem-solving and bulk marketing for the first time – while other areas of work are as diverse as community microfinance, trauma counselling, traditional reconciliation ceremonies, and recreational opportunities.

GRG changes as the groups do, with change monitoring systems and a heavy presence in these communities enabling us to respond to new requirements as they arise. 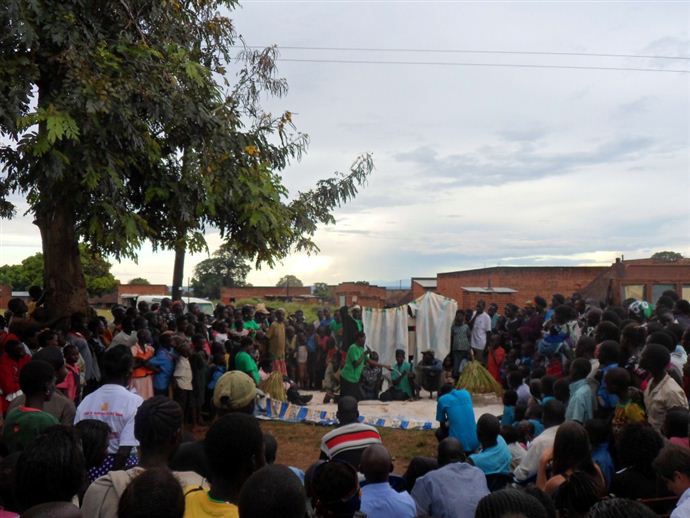 Above: Group members on the South Sudanese border performing a play about how to solve land conflicts to their fellow community members.

In Managing the Non-Profit Organization, Peter Drucker wrote: “The “non-profit” institution neither supplies goods or services nor controls. Its “product” is neither a pair of shoes nor an effective regulation. Its product is a changed human being. The non-profit institutions are human-change agents. Their “product” is a cured patient, a child that learns, a young man or woman grown into a self-respecting adult; a changed human life altogether.”

The ‘product’ of the Grassroots Reconciliation Group is a new future for the hundreds of former child soldiers in northern Uganda who GRG seek to reintegrate. Clearly, not an easy product to manufacture, nor immediately apparent what the product would look like. GRG’s bottom-up management approach enables clients decide what the ‘product’ will look like, and puts them in charge of production. 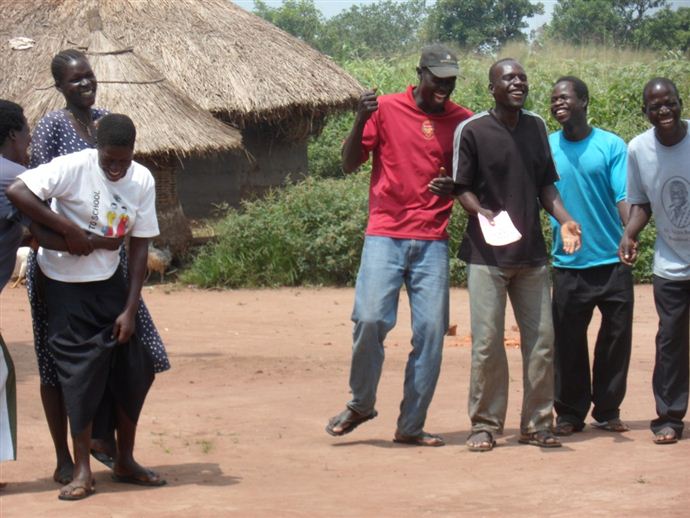 Above: Members of Can Deg Wor (meaning ‘Poverty needs no quarrel’) sharing a joke while on a group activity.

To see more about GRG’s work, please check out our brand new video launch here. GRG’s work would not be possible without the generous donations of people like you. Your donation could help change the lives of more people like Esther and others in these pictures. Please donate here. Thank you, and Merry Christmas.

Feel free to contact Christopher at chris@grassrootsgroup.org. The views expressed in this blog post are those of the author alone, and do not necessarily represent those of GRG or any other party.