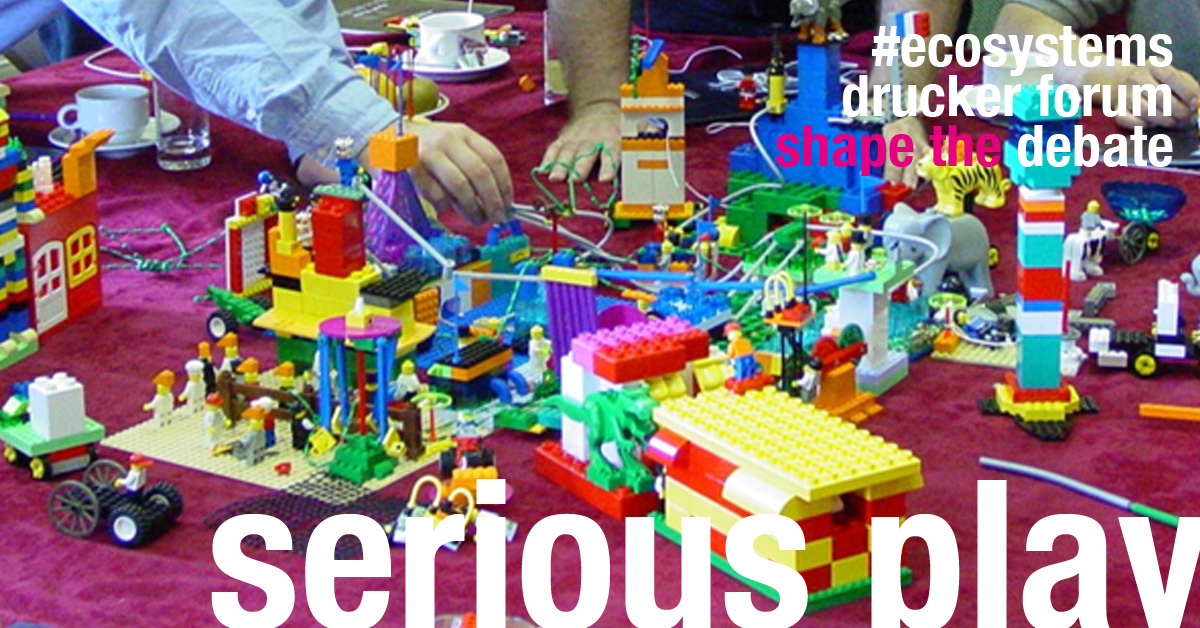 Managers often use their strong analytical orientation to make sense of increasingly diverse “big data” to better grasp and envision their company’s ecosystem — customers, technology, competition, and stakeholders interacting in myriad ways. Not surprisingly, the demand for data analytics competence and digital transformation is exploding. But is a sharp analytical mind enough?

I, like others, suggest a creative analogue mind is equally necessary. As long ago as the 1930s, Chester Barnard wrote about the importance to leaders of non-logical processes. Donald Schön described in the 1980s how intuition supports more rational, deliberate processes. Daniel Kahneman and others have shown that our beliefs are far from objective and we use all kinds of shortcuts to make decisions, including intuition, improvisation, and heuristics. Experienced business leaders like Jack Welsh have confirmed the importance of trusting “the gut.”

More than two decades ago, I experimented with groups of busy managers working with strategic planning. My colleague at that time, Bart Victor, and I modified two constraints of the traditional way to do serious strategy workshops. First, we changed the mode of intention from (serious) Work to Play. Second, we changed the media of communication from two-dimensional papers, slides and flipcharts to three-dimensional construction materials, specifically LEGO bricks. Out of this came the concept of Serious Play and, in collaboration with the LEGO Company, the LEGO Serious Play product was born.

The essence of the serious play process is to enable participants to also “think with their hands.” Working with 3D materials, the mind starts to see problems in entirely new ways, developing new knowledge about Self, one’s job, and the world – i.e. one’s intertwined ecosystem. Today, thousands of trained LSP facilitators-practitioners help leaders enhance their analytical side using specially designed sets of pieces from the versatile LEGO construction system.

The LSP method is grounded in theories from the natural and social sciences, in particular, in complex adaptive systems theory that looks at living systems with lots of interconnections and that often have strange properties, including sudden novelty and changes on different levels of scale. Here, a tiny difference in a system’s initial condition could make a huge difference to its ultimate evolution. This is why, despite sensors and super computers, we still cannot accurately predict human behavior during a football game nor customers’ reactions to a new product.

Complex adaptive systems theory is rich and lends itself to better understand human systems like companies, industries, project organizations, and the like. Using LSP thus helps participants better understand relations among the parts of a system –be they atoms, cells, integrated circuits, business units, people, or tribes – that unifies them into a whole. A major element of the LSP practice are exercises to articulate, visualize in 3D, spatially place, and connect relevant parts of an ecosystem, i.e. to create interconnected “knowledge landscapes.” that may look like the photos below. These spatial and heavily interconnected ecosystem models lend themselves to deep dialogue leading to new insights (see exhibit 1-2). 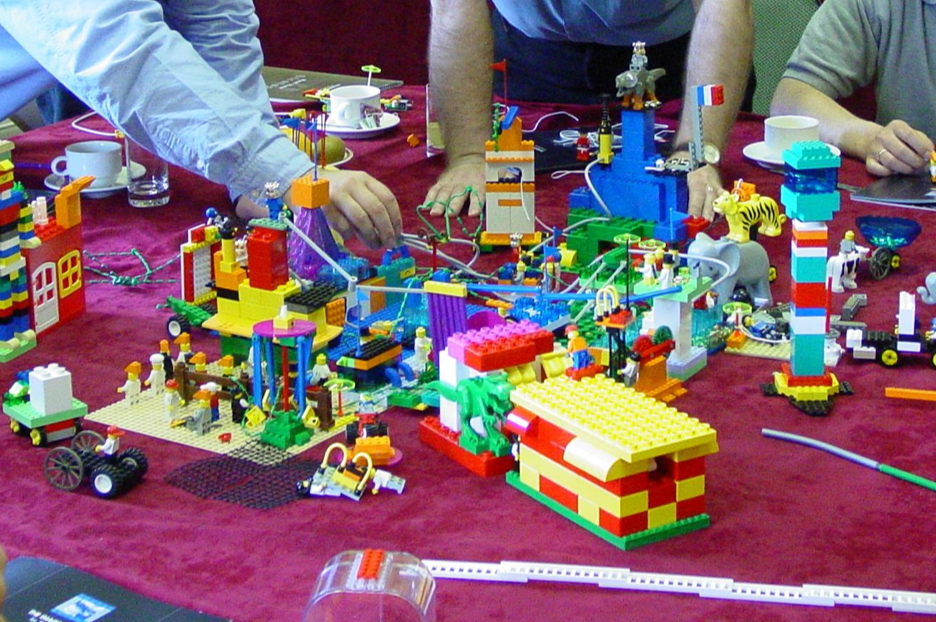 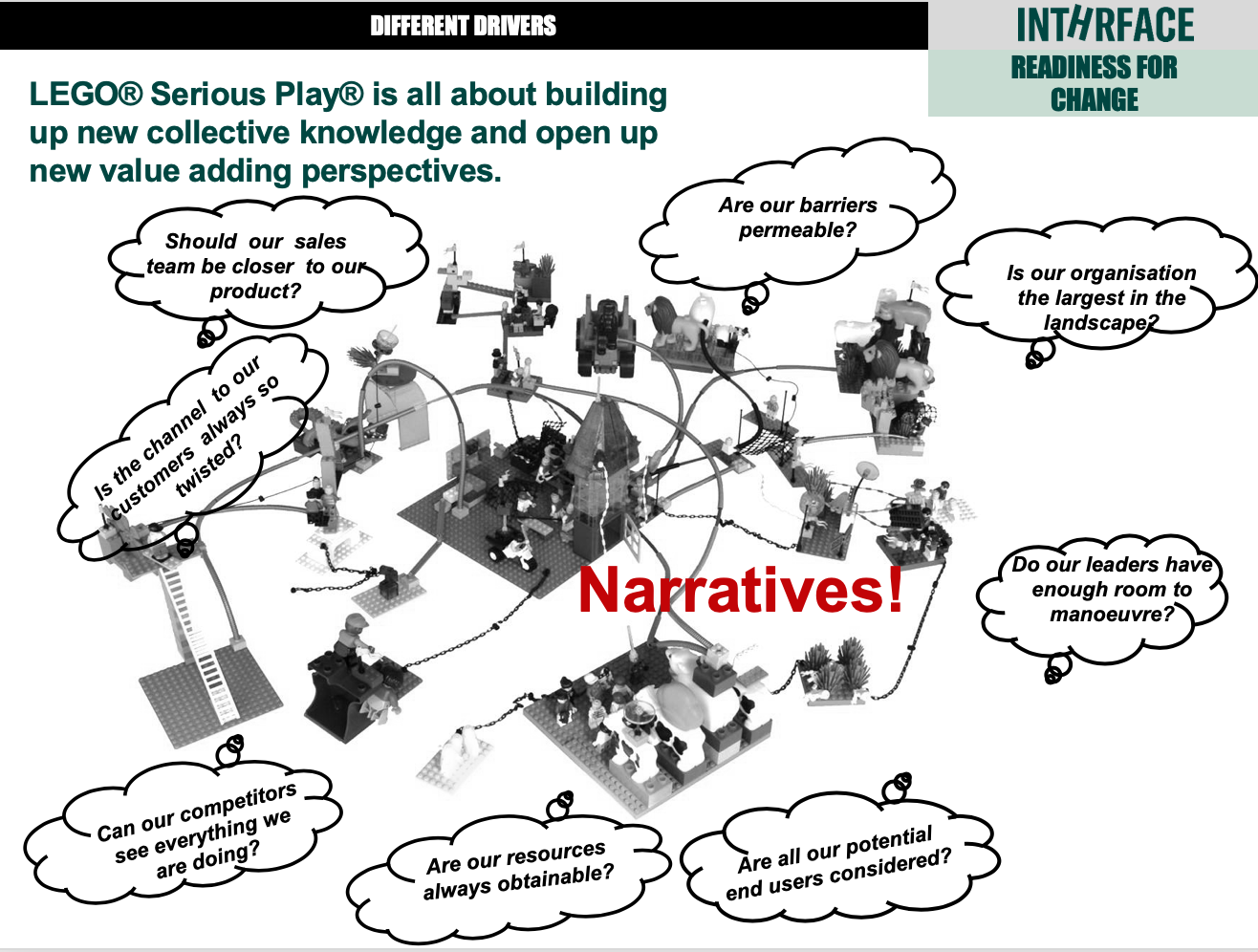 Peter Drucker saw himself as a social ecologist and so I wish he could have experienced the 3D social ecology of LSP. But, you can. Join me at the pre-conference workshop Global Peter Drucker Forum in Vienna November 20.