The “gig mindset” research is based on eight behaviors (see figure below). The traditional mindset and the gig mindset are posed as opposites on the table, but in reality, people find themselves at different points along the spectrum, and individual people see themselves at multiple points on the spectrum depending on context and circumstances. The eight behaviors were defined with the help of my Advisory Board.

The first phase of the research was a short online survey involving 297 people around the world who feel an affinity to the gig mindset as we defined. The second, ongoing phase involves a series of interviews and focus groups in Asia, Australia, Europe and North America. 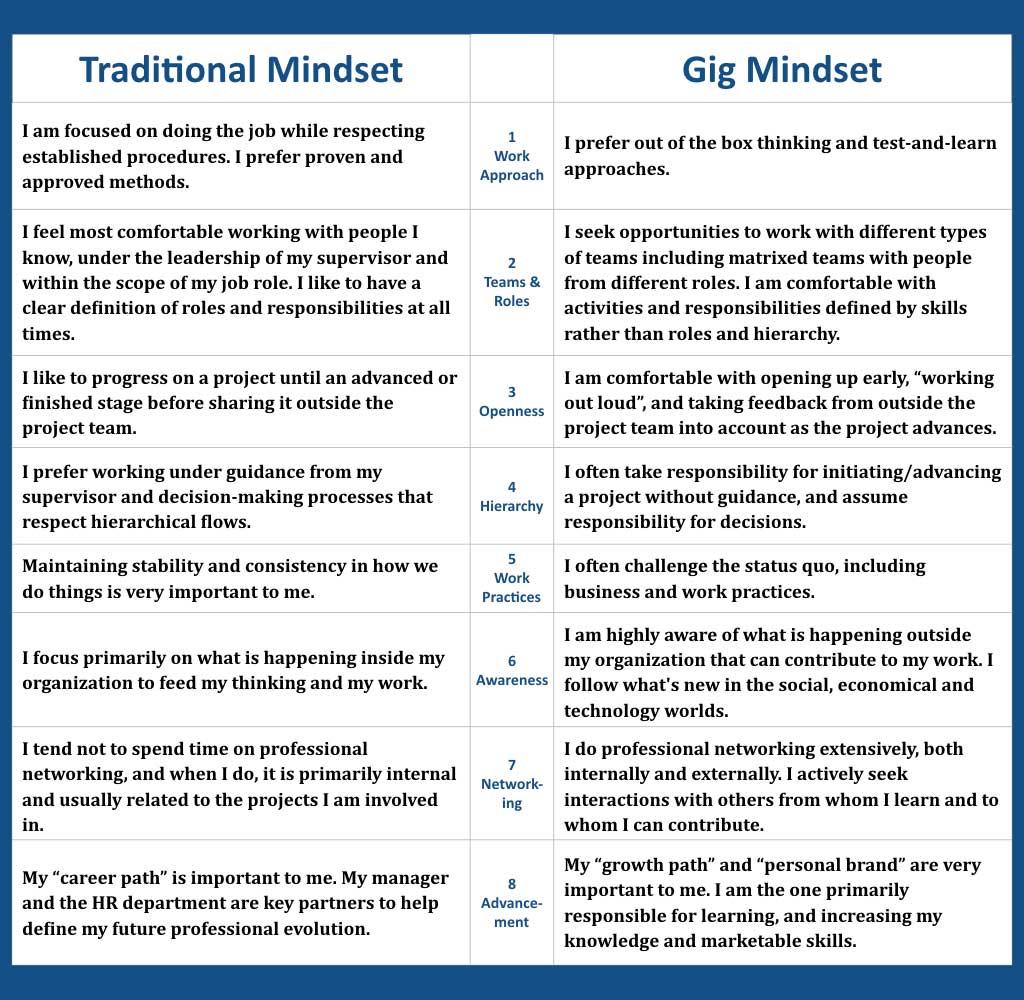 The gig mindset is above all an identity

A technology leader in his late 40s in a large highly regulated sector shared his moment of self-discovery after completing the survey:

“This has been an interesting process. I have assumed that I am just a ‘square peg’, and although I feel that I have much to contribute to the organization, it feels as though it is me that does not fit and that it is up to me to become a better ‘corporate citizen’.… For the first time I can now point to something and say ‘Hey I’m a gig-mindset worker! You like the outcomes – so how about lightening up on the corporate stuff!”

Another survey participant talked about his manager and how they often disagreed on policies and practices:

“I liked him as a man but I didn’t really care for his decisions. So it was his identity that conflicted with my identity. As I’m building the context for my team, what I’m doing is giving them room where they can find their own identities. And I’m giving them a narrative where we can build an identity together. And that identity is about doing innovative things, adding value to our colleagues, and that kind of stuff. Right?”

The gig-mindset person is a rare resource, serving a role in organizations that is often neither recognized nor rewarded

A woman working on an enterprise transformation project in an international company headquartered in France explained to me how she has seen the gig mindset in her current and previous companies:

“People with a gig mindset are not solitary cowboys roaming the wild west of organizations. They have charisma and know how to bring people together around a project, around a mission. They often work undercover, in the gaps between official initiatives, bringing life to spaces in the organization where previously there was nothing. When the project takes shape and is sustainable, often someone else takes over, as the organization prefers a visible project manager with a clear, understood profile.”

One manager explained why the gig mindset is a threat to hierarchy and therefore hinders career advancement:

The gig mindset requires resilience on an individual level, which may, in part, come from age and experience

The survey data show that older workers are more likely to have a gig mindset approach to work whereas the younger age groups self-assessed at the lowest level in the survey population. Unsurprisingly, the younger workers rate themselves significantly lower on behavior 4: assuming responsibility outside of hierarchical systems. This could mean that the least experienced people try harder to “fit in”, while more experienced people feel freer to act as they think best.

A woman in the 45-52 years age group, working in learning and development, explains the gig-mindset survival tactics in her organization:

“Those with a gig mindset simply get on with their work their way. There has definitely been some attempt to discourage this way of working as senior leaders are all of a certain age and have the same perspective of looking at work, which is hierarchical. Having said that, the few of us who do operate from a gig mindset simply choose to ignore them. If we achieve the expected results then there is very little they can do to us.”

Inter-generational influence can go both ways

Older workers are more likely to seek opportunities to work with different types of teams and with people from different roles. They are more comfortable with activities and responsibilities defined by skills rather than roles and hierarchy. They can help younger workers acquire more flexibility by making sure teams have diversity in age.

On the other hand, younger workers are more likely to be comfortable opening up early by “working out loud”, and taking feedback from outside the project team into account in early stages of a project. By involving older workers in their working out loud practices, they can help them experience firsthand the benefits of open sharing.

Most people in the survey, regardless of age, agree that advancement via a personal growth path is more important than a career path. However, the older workers have realized that networking is a lever for personal growth more than have the younger workers. Inviting them into their networks can be mutually beneficial.

The future leans toward the gig mindset

The CEO of a 3000-person organization in the US wrote to me:

“The gig mindset will be the real competitive advantage during the digital transformation era.”

A senior manager in a UN agency in Geneva predicts:

“Gig-mindset people are like early adopters. There are not many today, but their numbers will grow gradually”.

In one of the first focus groups in Paris, 18 people from large global organizations discussed how they thought a gig mindset will change organizations in the future, enabling them to:

A senior leader in a specialty chemicals company in Europe came up to me after I launched the research initiative a few months ago at a conference. His question:

“What can we do to grow the gig mindset in our company?”

Answers to this fundamental question are emerging through interviews and real life examples from survey participants. Future posts will focus on how to facilitate a gig mindset from both individual and organizational viewpoints.

Please get in touch if you would like to be interviewed about the gig mindset, sharing how you perceive it in yourself and people around you, and how think it will shape organizations in the future.

Jane McConnell, independent advisor and researcher (Netjmc) has conducted extensive research for 10 years with over 300 organizations around the world in annual surveys on “The Organization in the Digital Age”. Her foundational framework has been used by many organizations to help define their internal digital strategies. The 2016 report was included in Boston University’s “Leading in the Digital Age”, edX course. In addition, she has worked as a digital strategy advisor with large global organizations in Europe and North America for 18 years.

Jane McConnell (NetJMC), based in Provence, France, is an independent digital strategy advisor and analyst, who works primarily with large organizations headquartered in Europe. www.netjmc.com.