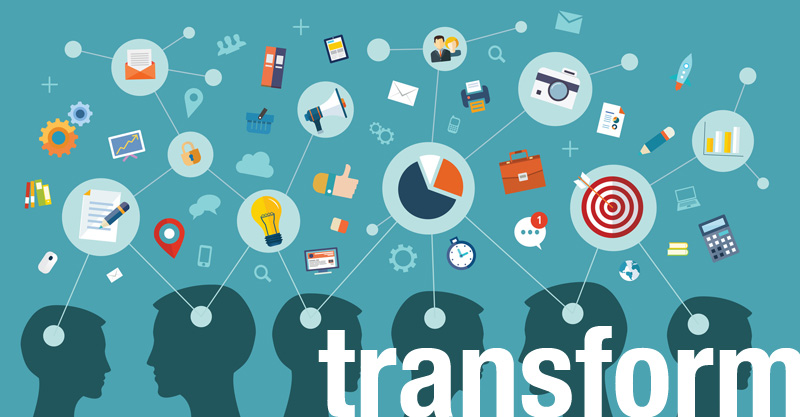 “The purpose of an organization is to enable ordinary human beings to do extraordinary things”, Peter Drucker

Work has always been considered an essential part of being human: a means of providing for food, clothes, and shelter. In the wake of the social turmoil and rising unemployment which led to the February Revolution of 1848 in France, the French socialist leader Louis Blanc argued that human beings have “the right to work”, or engage in productive employment, and may not be prevented from doing so.

The right to work was later safeguarded in the Universal Declaration of Human Rights by the United Nations General Assembly and recognized in international human rights law through its inclusion in the International Covenant on Economic, Social and Cultural Rights.

But since the industrial revolution, workers have been progressively reduced to numbers, headcount, assets, fixed costs; and organizations have been driven primarily by targets and control systems. Significant innovations in management have mostly focused on doing the work faster and more cheaply.

We had to wait for Peter Drucker to put the human being central stage, with his famous identification of the “Knowledge Worker”. Employees were not just hands; they also had a brain.

Unfortunately, Drucker’s wise words were soon lost in the erroneous and destructive theories that centred the organizations’ purpose on increasing shareholder value. Productivity, efficiency gains, and short-termism would take pride of place for decades, mostly at the expense of employees and the human and social side of organizations.

The impact of globalization and technological advancements, with thousands of companies collapsing and millions of jobs vanishing in western economies, has caused an enormous loss of confidence in capitalism and western leaders. And according to Silicon Valley futurists, over the next 10 years, societies will experience more change than in the past two and a half centuries. More change, at a greater speed than ever!

Despite this daunting outlook, let me put forward one idea that can inspire us to remain positive and prompt us to action.

There is one model of productive collaboration, a method of work to generate value, that has remained constant over centuries, irrespective of organizational fashions. This universal method of working and organizing work is the project. Project-based work has been the engine that turned ideas into reality and generated the major accomplishments in our civilisation.

Behavioral and social sciences confirm that there are few ways of working and collaborating more motivating and inspiring than being part of a project with an ambitious goal, a higher purpose, and a clear fixed deadline.

But the project is not only the most human-centric and value-creating vehicle for human effort; even more important, it is also resilient to robots, artificial intelligence and many of the technological “advances” that seem to aim at eradicating the right to work.

Yet, very few individuals have been trained to define and manage projects successfully.

According to my latest research (see chart), fewer management resources are being consumed by straight-ahead operations year by year. At the same time, and almost as communicating vessels, the number of projects run in organizations, together with the budgets and resources dedicated to them, have steadily increased. 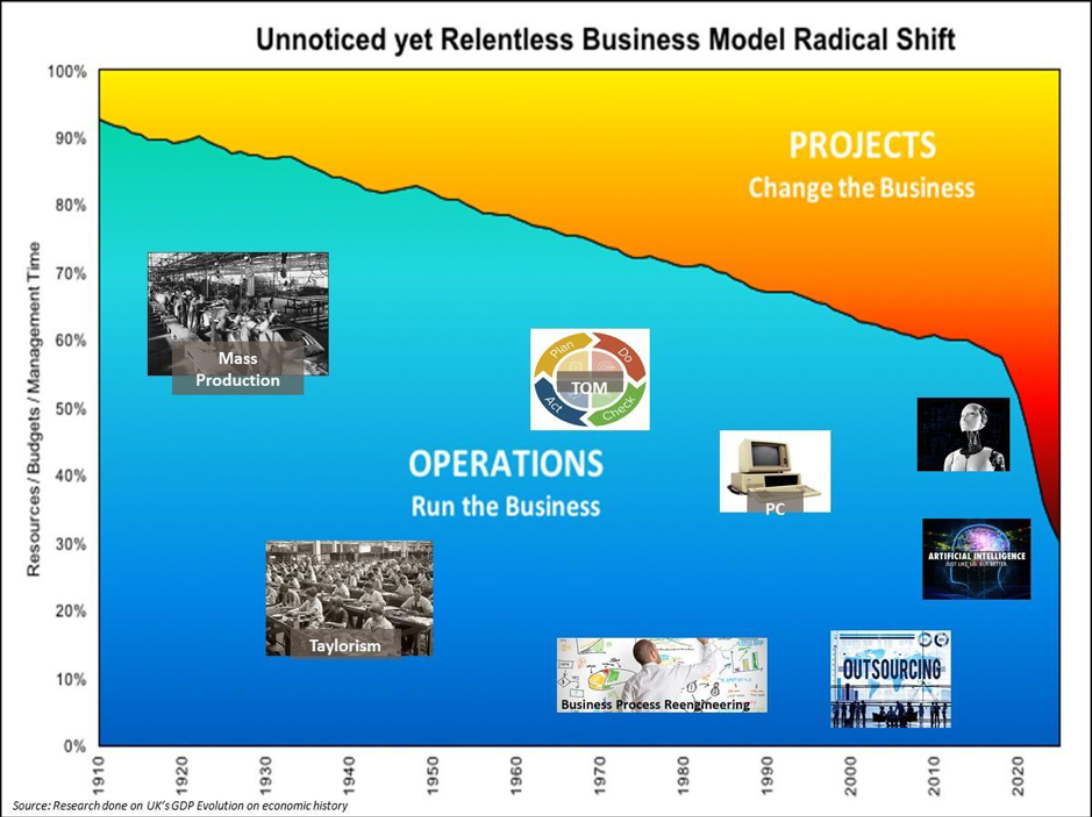 Disruptive technologies will accelerate this trend. Robots and AI will take over much of the operational work, where they have not done so already. Organizations will shift their focus to projects and project-based work – leading to what I have called the “Project Revolution”. In this new landscape, projects are becoming the essential model for delivering change and creating value. We are witnessing the rise of the “project economy”. The so-called gig economy is driven by projects. This represents a massive disruption that is not only impacting the way organizations are managed. In fact, every aspect of our lives can be thought of as a set of projects. For example, a project-based approach is bringing much-needed new thinking to education, to careers, to corporate governance and in one or two bold cases even to democratic government itself.

We will all be project managers soon – and we must learn how to use the new rules to maximum effect.

Project-based work will increase the focus on Humans – Embrace it!

The good news is that project-based work is human-centric. Projects cannot be carried out by machines; they need humans to do the work and the thinking. The purpose of the project is the centre around which people and resources are assembled, bond, interact, plan the work and address emotional aspects to create a high-performing team. Technology will, of course, play a role in projects. It will improve the selection of projects and increase the chances of success. But technology will be an enabler, not the goal.

My plea is for society, organizations, leaders, politicians, and people to build the competencies required to transform and thrive in the new digital and project-driven economy. To learn how to set ambitious and inspiring goals; to establish clear deadlines and engage employees and citizens around a higher purpose. To establish a culture in which ideas are transformed into reality through projects. We should not be afraid of the future and the unknown. Let’s keep learning, and embrace project-based work.

Antonio Nieto-Rodriguez (www.antonionietorodriguez.com) is a leading champion of Project Management and Strategy Implementation. He is the author of “The Focused Organization” (Taylor & Francis) and currently working on his next book, “The Project Revolution” (LID). Recognised by Thinkers50, Antonio is a visiting professor at Duke CE, Instituto de Empresa, Solvay, Vlerick, Ecole des Ponts, and Skolkovo.