When Peter Drucker uttered these words to a group of IBM executives, new complexities were tripping up the world. It was 1955.

In the more than half a century since, of course, the level of complexity has only increased across all of our institutions – political, economic and social. Indeed, as we move further into the 21st century, the complexity curve seems to be growing exponentially. The notion of achieving neatly laid-out objectives through systematic planning has become increasingly questionable. More and more, managers feel overwhelmed by the speed of change and the degree of uncertainty in their environment. 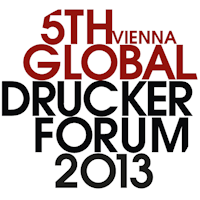 All of this makes the theme for the fifth annual Global Peter Drucker Forum – set to be held in Vienna on November 14 and 15, 2013–particular timely. This year, we will gather under the banner “Managing Complexity.”

Trying to master complexity is – well, quite complex. While the interconnectedness of the world brings about tremendous benefits such as ubiquitous access to knowledge and borderless communication, it also generates unprecedented risks. Complex global systems – financial markets, energy grids, supply chains that span continents-are by their nature fragile. And thus management failures can have catastrophic consequences, as we have repeatedly witnessed during the past decade.

“In any system as complex as the economy of a developed country,” Drucker warned in The New Realities, “the statistically insignificant events, the events at the margin, are likely to be the decisive events. . . By definition they can be neither anticipated nor prevented. They cannot always be identified even after they have had their impact.”

Yet most managers still seem to be anchored in command-and-control and cause-and-effect thinking patterns. Organizations continue to be understood as machines (complicated but predictable) rather than as organisms (highly complex, adaptive systems with limited predictability). Meanwhile, linear approaches to problem solving often have the opposite effect of what is intended.

How should managers cope with an increasingly complex environment? What does complexity mean for management practice in the 21st century?

Do we have to adjust our current management approaches or are we talking about something bigger – that is, fundamental changes or even a new paradigm?

What can managers learn from complexity sciences without falling into simplistic analogies between natural systems and social systems? Can we calculate our way out of complexity?

What are good practices pointing in the direction of new, more adequate management methods and tools? Are approaches such as design thinking, Agile Software Development and “Antifragility” some of the keys to a better future?

What are the consequences of complexity for the management of risks in business and society? Can we simplify complexity as many of us would wish?

Since analytic methods alone cannot provide the answers to complex, human systems, what can we learn from the arts and humanities?

As we begin to gear up for this year’s Drucker Forum, you are invited to provide your perspectives on these or other questions related to complexity. (They will be published on this blog after review by a small editorial team.) Please join the conversation either by commenting or by sending proposed blog posts to the following address contact[at]druckersociety.eu.