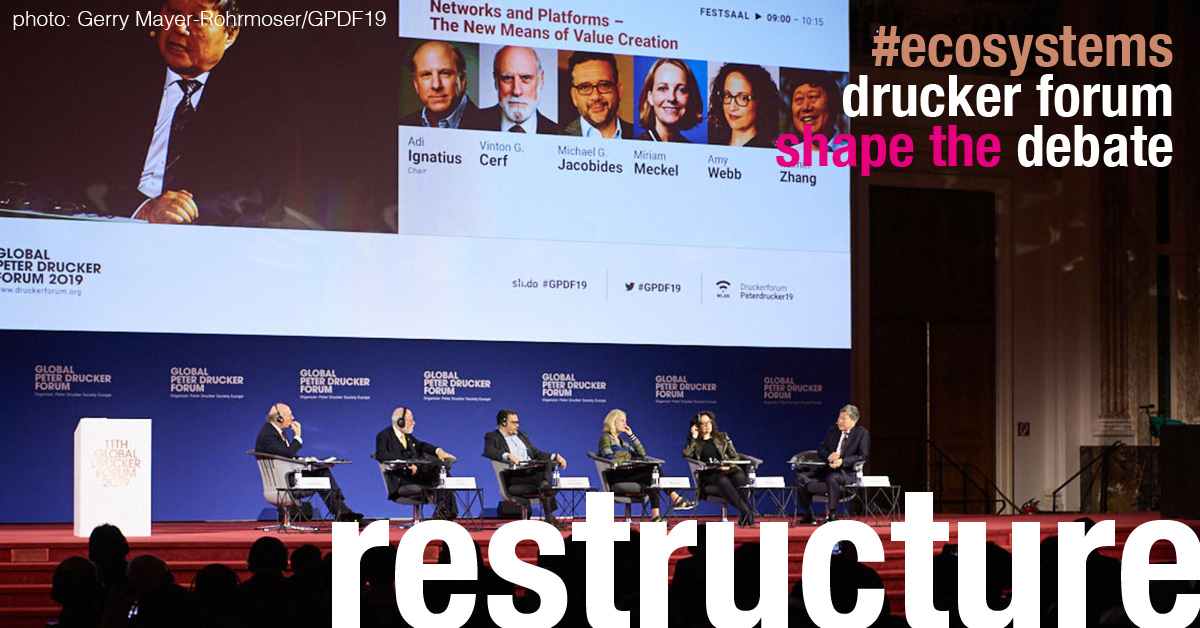 As the leading management conference in the world, the Global Peter Drucker Forum serves as a conduit of powerful ideas and insights for both business and society.  In 2019, the conference theme was The Power of Ecosystems


The Biggest Risk for Business: Focusing on the Product

Adi Ignatius started with the intriguing statement that the biggest risk for companies now is to focus on their product, an idea he attributed to panelist Zhang Ruimin. “If companies are not thinking about a broader ecosystem of customer experience they’re going to be left behind.”

So how should we think about ecosystems?

Marc Jacobides explained that while we might speak of ecosystems in metaphoric and playful ways, it is firms like Haier that are creating a “dense web of relationships that are operating across their own boundaries whose power rests on structured sets of collaboration.” Opportunities for value-creation emerge because technology allows us to revisit how we add value and reorganize the value chain.

Vint Cerf expressed that as an engineer, he wanted “stability, interoperability and the ability to adapt to change.” Google has reorganized itself internally to “make the ecosystem work well.” It has created a core group focused on “making the ecosystem function technically and uniformly,” he explained.

Adi then asked: “Do you think the current platform model will survive?”

Miriam Meckel suggested that there were two pathways. One, a continuation of the current platform monopolies which will continue to grow via network effects and create “gargantuan wells of data”; if this continues, she surmised, there will be a bifurcation of the Internet based on politics – with a Western internet and a Chinese internet with its social credit system.  Two, the “breakup of Big Tech” – as proposed by Elizabeth Warren – which will create a more competitive landscape with more viable platforms emerging. This model could encourage public value creation opportunities, she implied.

Vint Cerf insisted that there was a third way, beyond monopoly and competition, which was collaboration and cooperation. He said there was a path that allows collaboration and cooperation, even while you compete with each other, but where you don’t feel trapped in a particular piece of an ecosystem.  His example was Kubernetes, the open source container orchestration system for automating application deployment, scaling, and management.

What is an Ecosystem Brand?

Adi asked Zhang Ruimin: “You’ve called Haier an ecosystem brand. What does that mean for your business strategy?”

He started bluntly – “We all need to transform into ecosystem companies or we won’t be able to survive.”  “Haier,” he explained, “has been one of the been ranked as one of the largest white goods manufacturers in the world, but now we want to transform into a major ecosystem.  In the future I think single standalone products are no longer valuable. What’s more valuable is a user case scenario where all of the appliances are connected together.”

Users want the best experience – a total experience.  He continued, “Haier is working on an Internet of food which connects oven, microwaves, stoves, and refrigerators; the connected appliances talk to food producers and cook and recipe providers so that our users are not simply using the appliances but accessing the best food ingredients and the best recipes so it’s about the experience of food. Partners join us because they can grow 15% (per annum) in China using the Haier ecosystem as a channel. This means that we are no longer fighting alone but fighting together for our users.”

Ruimin saw two trends for the future: one, where products are replaced by integrated use-case scenarios and, two, where ecosystems overlap and cover different industries.

Ruimin said that deal sizes might be sixty thousand dollars instead of a few hundred dollars, showing the value of this approach.

To demonstrate this, Haier uses its experience stores to showcase the ways in which products are embedded into the daily life of the consumer.  The smart home has a smart kitchen, a smart living room, and a smart balcony.

More intriguing is how Haier then engages the consumer in an ongoing “conversation” to continuously improve the living experience. Most customer relationships end with the sale, but here the relationship actually begins after the sale!

Inspired by Ruimin – Philip Kotler and I came up with the idea of an “Internet of Purpose.”

How Should Companies Prepare for the Future?

Adi then asked: “How should companies prepare for a future where they may have to participate in ecosystems?”

Amy Webb pointed out that one of the challenges is based on how humans use language.  While we tend to speak in terms of metaphors, we need to get far more specific to address the issues presented to society by AI and Big Data. “There’s a lot of misplaced optimism and fear about this,” she said, “ with a lot of our cues coming from science fiction, where we’ve got very clear ideas of what the future might look like: for the most part it’s robots coming to murder us in our sleep, or robots taking our jobs.”

The real issue, she says, is that we don’t have a lot of transparency and clarity around data policy.  At the highest levels of business, she finds there is almost no discussion of data governance.  This is important, she explains, because “we’ve had a leadership vacuum in the United States over the past few administrations, while in other areas of the world, we currently have conflicting ideas of the future of data and AI.”

Webb’s concern: “what if some of these companies started trading on this proprietary data in a way that that might cause a new kind of an inflation that we’ve never seen before, a new kind

of housing bubble or problem?”

Webb also brought up the tale of two internets – US vs. China, and with it her concern that we are witnessing a restructuring of the world economy and a future of deep uncertainty.

Organizing as an Ecosystem: The RenDanHeYi Model

“In the era of the Internet of Things, companies need to become ecosystem companies.”

With that statement, Zhang Ruimin began explaining the ecosystemic organizational structure of the Haier Group. “We have created a RenDanHeYi model which means aligning our employees with the needs of the user.”

Translated, “Ren” is employee, “Dan” is “user needs,” and “HeYi” is “the connection between each employee and the needs of each user.”

Ruimin explained how The RenDanHeYi model lets go of the traditional “command and control” management paradigm.  At Haier, the traditional management model has been replaced  to create a network of thousands of micro-enterprises, each a small team of about eight employees.

“Peter Drucker said that in 21st century companies everyone will become our own CEO.  This is what we are doing. CEOs have three powers: the decision-making power, the HR power, and the power to set compensation. We gave these three powers back into the hands of our micro enterprises.”

Ruimin also explained that when other companies came to study Haier, he would ask if they could give up the three powers to their people.  The answer was always “No.”

The only other companies we can think of that have done something similar and sustained it over time are the Semler Group (now Semler Partners) in Brazil and W. L. Gore & Associates, Inc. in the US.

This is the true meaning of “Leadership Everywhere,” the theme of next year’s Drucker Forum.


Christian Sarkar is an artist, entrepreneur, and consultant.  He is the founder of Double Loop Marketing LLC, a marketing consultancy, and Ecosystematic, an ecosystem mapping tool. He’s also the co-author of Brand Activism: From Purpose to Action, a book written with Philip Kotler, the “father of modern marketing.