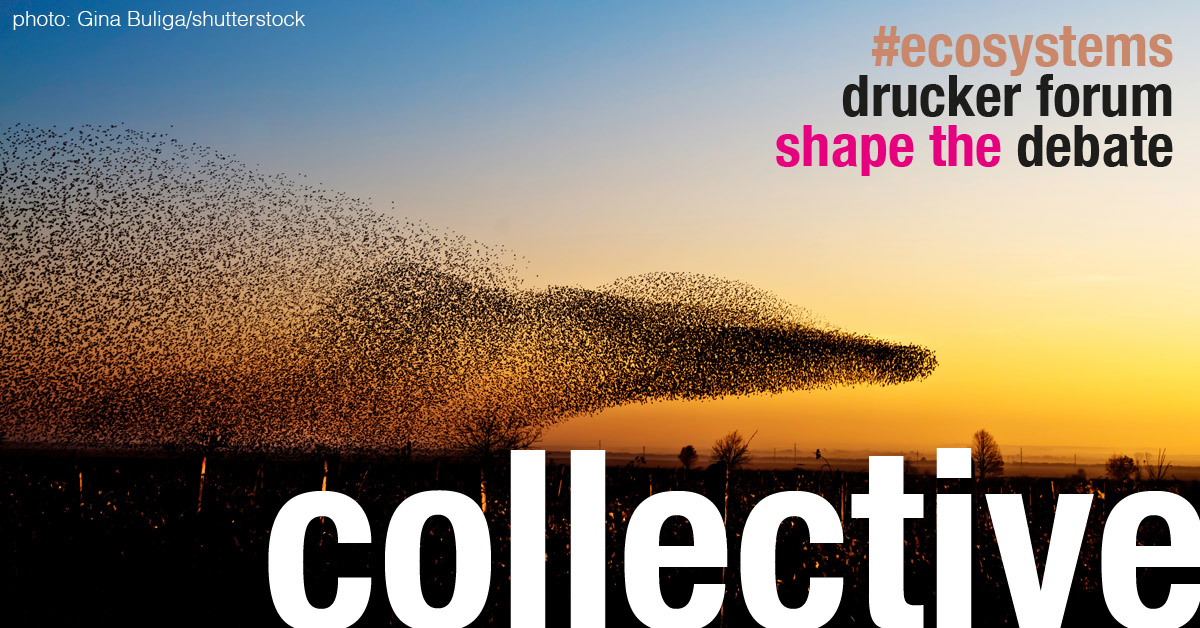 Describing in his HBR article of May-June 1993 the challenges an ecological approach to business strategy brings with it, James Moore emphasized that we have to keep in mind that business ecosystems are not co-evolving organisms, but social systems the larger patterns of which are maintained by a complex network of choices made by real people with their bounded rationalities.

The obvious implication of this remark is that when talking about ecosystems, we have to leave the lofty heights of strategy, targets, goals and corporate communication, to focus instead on what Philip Selznick has called the operative systems on which the functioning of ecosystems will depend. The view from the top argues that the functioning of ecosystems implies a fundamental transformation of the way the game of cooperation and competition is played. The key question then becomes how this functional requirement translates into the day-to-day practice of the actors in the operative systems of the organizations destined to become part of an ecosystem. And that is no small affair. It entails a complex process during which all levels of the organizations have to learn to play their game differently.

The word “learn”, however, is misleading. It suggests that communication, discourse and pedagogy will make the difference : if the members of the operative systems are addressed correctly, they will understand what the switch is all about and then change their behavior accordingly. If it were true that it is all merely a question of cognition, understanding and agreement, then companies could be run and function on rational argumentation.

However, things are more complicated. The behavior resulting from the interdependent choices Moore talks about, can and should be understood as a boundedly rational reaction of the people involved at all levels of an organization, to the web of mutual dependencies that they have to manage to succeed in their respective tasks.

Their behavior draws its rationality from this ongoing attempt. This being so, the transformations needed at all levels to function as an ecosystem, implies not just individual but a process of collective learning, in which a set of mutually dependent individuals succeed together in restructuring their transactions in such a way as to enable them to progressively discover new ways of dealing with, and structuring their interdependence, and in so doing, invent new rules to play the game of cooperation and competition, congruent with the functional requirements of ecosystems.

Business ecosystems are not only social systems. They are also political systems. The direction and result of the collective learning which their implementation calls for, are distributed processes taking place simultaneously at all levels of the organization. Their outcome cannot be determined by decision or targets, nor can it be fully mastered or planned. As they unfold, they produce all sorts of unanticipated consequences which are beyond the intentions of any of the participants. Their emergent properties cannot be dealt with by algorithms alone. They need to be appraised and monitored by humans on a day to day basis, where and when they occur.

This is where the new world of ecosystems meets the old world of the management of organizations, its familiar dilemmas as well as the anthropological limits to transparency, openness, flatness and fluidity of functions and borders that earlier waves of organizational transformations have come up against. It is true that these anthropological limits are not immutable: People can learn, and do. But learning takes experience in time, and time, we are told, is short in supply. We might want to believe that the new platform technology and AI will incorporate ready-made solutions for these dilemmas and produce the needed fluidity, openness and transparency. Our experience with the two preceding waves of what was not yet called digitalization should moderate such technological optimism.

It remains to be seen how the transition to the ecosystem approach will be managed in the traditional sectors of the economy, how the anthropological limits referred to above will have been overcome or more probably simply pushed back, and what new kinds of organizations and organizational life this will produce.