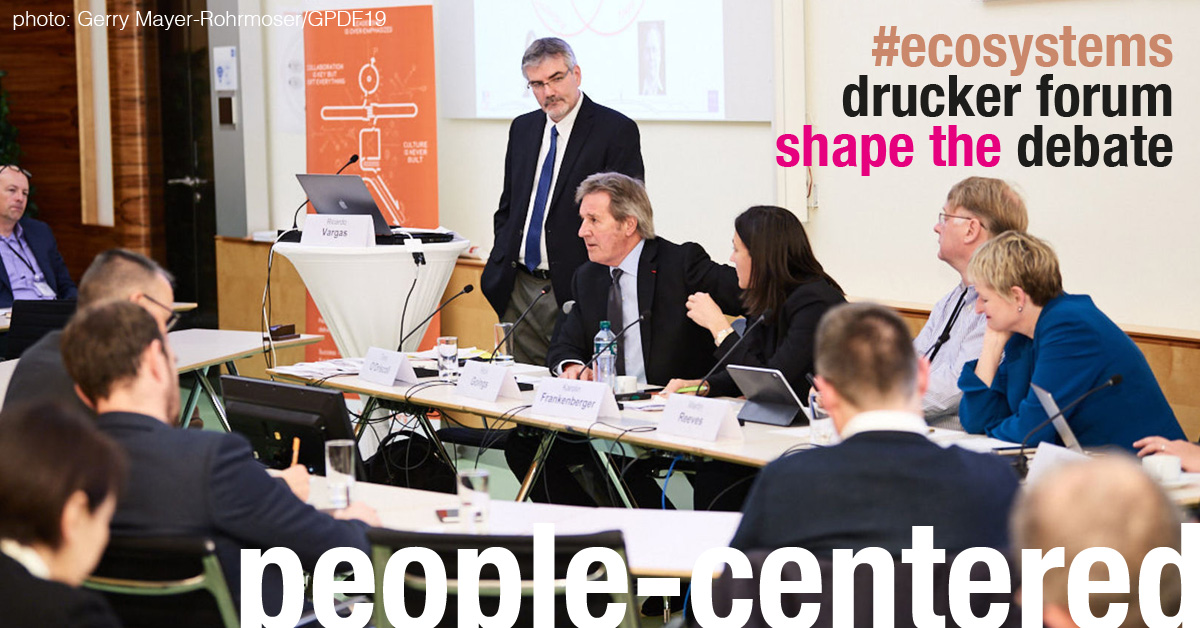 At last year’s Global Peter Drucker Forum, attendees engaged in a pre-conference workshop to confront the inconvenient truth that the failure rate in implementing organization transformation initiatives is too high and too costly.

The Project Management Institute (PMI) pegs the total cost of impotent transformation efforts at approximately $2 trillion per year – roughly equal to the GDP of Brazil. As things stand, organizations are squandering more than $3 million every minute on efforts that yield little-to-no change.

In facing this stark reality, a number of key questions surfaced: What is causing the need for increased organization transformation? Why can’t we develop strategies that are more resilient to uncertainty? What traps do we fall into in implementing transformation? What role should leadership play in transforming organizations? How do we bring our people along?

Transformation by means of ecosystem

Michael Jacobides of London Business School tackled the question of increased organization transformation. He argued that modern-day technology can activate intra-firm networks, or ecosystems, and integrate the respective capabilities of these firms to create, deliver and capture unique and differentiated value to customers.

This ecosystems based approach, Jacobides posits, has both a Yin and a Yang. The Yin of ecosystems lies in the simplicity, convenience and seamlessness with which new offerings are surfaced and integrated into the lives of customers. The Yang lies in the complex web of relationships and agreements that are being structured between different ecosystem players to deliver that seamless and differentiated experience to the customer.

As the context within which value is created, delivered and captured evolves from linear value chains into networked value ecosystems, the value creation game is changing. In an ecosystem based game, the goal of each player is to remain relevant and useful to other players in order to sustain the overall health, resilience and development of the shared ecosystem. In a value chain based game, the goal of each player is to defeat the other players by seizing control of the most profitable position on the value chain and defending that position to maximize value capture by squeezing other players out of the game.

Given this game-changing shift in value, Jacobides asserts that successful transformation must begin by first-and-foremost transforming people’s errant perceptions around how value is created, delivered and captured in an ecosystem-based world.

Rita McGrath of Columbia Business school addressed the question of why we fail to develop strategies that are resilient to uncertainty. She introduced the concept of a strategic inflection point which she defined as a change in the environment that causes the taken-for-granted assumptions on which your business is based on to no longer be true.

Successful transformation, McGrath contends, begins with cultivating empathy at the edge of the enterprise. It is only by truly understanding the context your customers find themselves in that you can identify the leading indicators that signal a potential strategic inflection point for your business. Once identified, successfully responding to a strategic inflection point requires that organizations first unlearn much of what they previously believed to be true. Then attempt new and different ways to create, deliver and capture value. Continue until a fresh set of beliefs and behaviors, better aligned with the new business environment realities, are appropriated.

McGrath maintains that this type of organization transformation cannot succeed without an environment of psychological safety where people believe they will not be punished or humiliated for speaking up, challenging the status quo, taking risks and failing.

In a traditional stable and predictable operating context where an organization recognizes a misfit with its environment, a change plan is created to move the organization from its existing state to a new state that better fits with the environment.

However, in a world of increasing uncertainty, Reeves maintains that change very rarely goes according to plan. Since ecosystems are dynamic and unpredictable, he cautions that applying a traditional model of planned change can be lethal. Instead, a more emergent test-and-learn based transformation approach must be employed.

Since organizations don’t change unless people change, Reeves argues that change should come from people rather than be imposed upon them. People who are involved in creating change do not resist change. People who have change imposed upon them resist change. In an ecosystems based operating context, it is critical to engage people’s ingenuity and imagination to dynamically uncover and pursue value generating progression paths.

Karolin Frankenberger from University of St. Gallen tackled the question of leadership and organization transformation by introducing the concept of the Transformer’s Dilemma: a situation where leaders must deftly navigate the polarities of exploiting the core business while simultaneously seeking the next wave of breakthrough growth opportunities.

This challenge requires two distinct and opposing leadership systems to operate successfully. In a traditional core business, the leader’s role is to command and control resources to maximize the organization’s profit. In an ecosystem based context the leader’s role to connect and collaborate to maximize the ecosystem’s value. To succeed in navigating these polarities leaders must maintain their authenticity by staying true to the organization’s purpose and core values while having the ambidexterity to lead differently in different contexts without compromising that authenticity.

Rick Goings, Chairman Emeritus of Tupperware addressed the question of people and change by arguing that every successful strategy or business model works…until it doesn’t, and when it stops working all that is left is people.

If the people in your organization suddenly vanished, all that would remain is an impotent agglomeration of assets that sit idly by, awaiting an infusion of human inspiration. People are the life-force of every organization. The structures, processes, practices and technologies firms invest in are practically useless without people.

While things can be managed people must be inspired, encouraged and led. The role of the transformational leader, Goings argues, is to cultivate fast, focused, flexible and fun operating landscapes that enable people to become the best version of themselves.

Brightline’s People Manifesto argues that people form the link between strategy design and delivery. People turn ideas into reality, they are the strategy in motion. Most transformation efforts fail because organizations over-emphasize the tangible side of change and under emphasize the emotional one. Successful organization transformation requires an empathic, people-centered approach that turns inspiration into action.

Anything less will almost certainly result in yet another costly transformation initiative that ultimately changes next-to-nothing.

Note: The PCT Framework can be viewed here

Tony O’Driscoll is an adjunct professor at Duke University’s Fuqua School of Business and a Research Fellow at Duke Corporate Education.