DRUCKER'S CHILDHOOD
AND YOUTH IN VIENNA

Peter F. Drucker was born in Vienna on November 19, 1909 in Vienna, when the city was still the vibrant centre of the Habsburg monarchy. He grew up in Kaasgrabengasse, a tranquil avenue in the Viennese suburb of Döbling. His father Adolph was a high government official, his "strong-willed, argumentative and independent" mother Caroline, a former medicine student with an interest in psychiatry, ran the household. Peter and his younger brother Gerhard were surrounded by their adored Grandmother and by any number of uncles and cousins and family friends who were university professors - in law, in economics, medicine, chemistry, biology, art history and music. 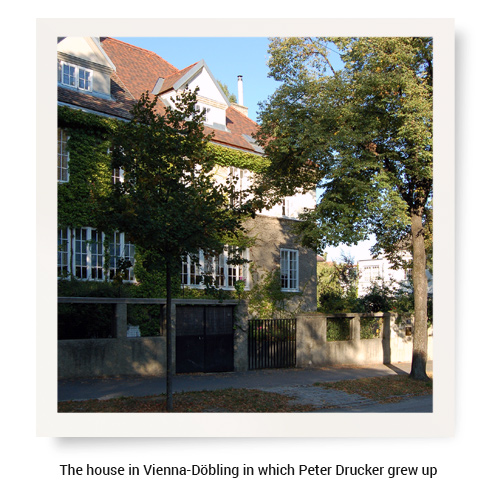 The Druckers lived in a semi-detached house designed by renowned architect Josef Hoffmann, shared by the family of the music historian and composer Egon Wellesz who belonged to the intimate circle of the poet Hugo von Hofmannsthal. Two or three times a week Drucker's parents hosted soirées at their home. State officials, lawyers, doctors, psychologists, scientists and philosophers met there for dinner and debated all sorts of hot topics - from economics to psychoanalysis. Already at an early age, Peter was allowed to participate. "That was actually my education", he states later.

Regular guests of the Druckers included the economists Schumpeter, Hayek and Mises, with whom Drucker's father had professional relations in his function as director of the K. & K. Commercial Museum (the forerunner of what would later become the Austrian Ministry of Economics). Hans Kelsen, who was married to the youngest sister of Drucker's mother, practically belonged to the family, even if Peter Drucker did not have a very good relationship to him: "I couldn't stand the ultra-rationality of my Uncle Hans." More cordial were Drucker's father's relations with the Czech top politicians Tomas and Jan Masaryk, who were also regular visitors.

In his book "Adventures of a Bystander" Peter Drucker describes his early years in Vienna, the cultural and intellectual environment in which he was brought up by venue of the individuals who fascinated him in the way they reflected their society: his Grandmother, Dr. Eugenia and Dr. Hermann Schwarzwald, amongst many others.

Drucker's parents belonged to the "Schwarzwald Circle" around the social reformer Eugenia "Genia" Schwarzwald. She came from the far end of Austrian Poland to the University of Zurich, graduated with the degree of Doctor of Philosophy in 1900, and made it straight to Vienna, determined to raise the flag for equal education for girls: Genia opened a college-preparatory girl's school, than the first full-scale women's Gymnasium in Austria. She also set up the first coeducational primary school in Austria, which Peter Drucker attended in fourth grade. His two classroom teachers were able to pass on to him lifelong lessons: "I took from Miss Sophy a lifelong appreciation for craftsmanship.. and respect for the task…". "And Miss Elsa had given me a work discipline and the knowledge of how one organizes for performance".

When the famine years hit Genia also organized co-op restaurants ("Gemeinschaftsküchen") and it was at the co-op restaurant at Thurngasse 4 (near Berggasse) where the eight or nine years old Peter was asked by his parents to shake hands with "the most important man in Austria and perhaps in Europe"- Dr. Freud.

Genia also ran and managed a very puzzling, talk show like Salon in her home in Vienna and up from the 1920s in her recreation resort, the summer villa "Seeblick" in Grundlsee, (on the Alpine lake Grundlsee in Styria, near the Freuds summer villa). She invited "guest stars" such as Thomas Mann and "fixed stars" such as Count Hellmuth Moltke (who in the Third Reich would become the wisest and most visionary head of the German resistance). She also invited guests whose job was to listen and to ask the right questions, mostly university professors, such as Ludwig Rademacher, who rebuilt the University of Vienna after World War II, and their wives. Peter was not only admitted to the Salons since he was a teenager, but also encouraged to speak out.